My husband, on occasion (OK, at least once a month) will go to the extreme side of things. For example, One Christmas I requested a Kitchen Aid stand mixer to replace my hand-held device that only had one beater, and he obliged. Under the tree, was a TV sized box that contained a commercial grade, Pro 6000 Kitchen Aid mixer that can make enough dough in one batch for 14 loaves of bread.  The fact that up until that day, I had never baked a loaf of bread should not be over looked here. It does not fit on my counter top for year-round use, so on occasion,  I will do a few push ups, run around the house, and get myself in shape to carry it from the pantry to the kitchen.

Keeping that scenario in mind, a couple of months ago, he went to the Sam’s Club store to buy batteries. When he returned he tossed a magazine on the table titled “Home-Made Projects”, he had already earmarked the section “Making your own backyard brick pizza oven in one weekend”. What? We very rarely order pizza and are within walking distance of great pizza place named (ready?) “Brick Oven Pizza”!! That we never walk to! “Won’t it be great to have hot, crusty pizza year-round?” he enthusiastically asked.  At the time, it was 19 degrees with a wind-chill factor of 11 and the term “Ove-Glove” was starting to take on new meaning. 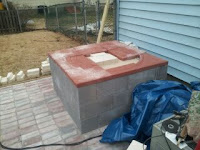 The following weekend had warmed up significantly and we headed to the stone yard. One of us was really excited.  The article stated that materials; cinder blocks, fire-bricks and vermiculite (I don’t know either) would cost about $120. He stood quietly for a moment as the register totaled $450 -with delivery, and then reached for his wallet avoiding my glare. I don’t have to tell you where this conversation would be going had this expenditure been “my” suggestion. Delivery was set for the following Saturday.

“I feel the need to build something with my hands”, he explained on the way home. It wasn’t lost on me that the closet door in our bedroom was falling off and we were having $450 worth of stone delivered so he could keep his hands busy. Now, my husband works in an office but is a craftsman by nature and I knew the finished project would be just perfect. And if he had the sudden urge to work with the earth, who was I to get in his way. But as Saturday approached, and the temperatures continued to climb into the 60’s, he postponed the stone delivery for one week to accommodate a tee time. I guess there are other ways to keep your hands busy.

Now several weekends later, his project is nearing completion. It is almost picture-perfect. I have done research on various pizza dough recipes as well those for artisan-type breads. I have learned that certain wood types offer flavorings that blend with some dough’s better than others. “You know, “he said as I was rummaging through cook books, “I read that pizza dough freezes really well. You could make several batches at one time!” I knew what was coming.…"hey, it’s a good thing I bought you that super-sized Kitchen Aid mixer!” Whew, I better get in shape.
Posted by Jo Ann Phelps at 1/04/2012 09:14:00 PM