My husband was way ahead of most of us when it came to cutting his consumption of red meat. As a matter of fact, 21 years ago this month, he gave it up cold turkey….um, literally.  On that snowy January day, as I had a nice beef stew going on the stove, he came home from a doctor’s appointment and announced “Colon cancer runs in my family, so I am not eating red meat anymore”. Now, I have been married to this man for 37 years and don’t actually know anyone in his family who has had colon cancer, but he said it and I believe him, and for the past two decades have stepped up to the challenge of creating “beef-less” meals.

At this point, I feel I should add that I love beef. As I remember, the smell of an eye roast with onions, carrots and potatoes roasting on a Sunday afternoon was (and I’m sure still is) without compare. I also must add that this man does not like pork. So for the past several years, you would find me at the kitchen counter starring at the business end of a chicken trying to figure a way to, well, beef it up. And remember, 21 years ago, the grocery stores did not carry ground turkey or chicken. There was no such thing as turkey sausage, turkey bacon, turkey chili, and turkey kielbasa or turkey hot dogs, the latter being a product I still will not buy. No, it was me, a knife and a chicken.

Now, I don’t want to sound like a martyr here because I did not give up beef. There were nights that I served him a broiled chicken breast while the boys and I shared a nice sirloin steak.  To this day, when we have dinner out, know that I am ordering prime rib, medium rare (another unhealthy habit). But in reality, cooking two different meats was rather expensive and inconvenient, so I learned to improvise.  Oddly enough, the recipe that quickly became a family favorite came on one Super Bowl Sunday when I was trying to fool the palate into thinking it was tasting hot pulled pork and not something that at one time clucked or gobbled.  (Insert picture)

I figured that almost anything cooked in a crock pot would fall apart eventually, so there is where I started. I attempted several different versions of slow cooking a turkey breast with all the appropriate seasonings, garlic powder, paprika, salt pepper, pepper flakes, vinegar, ketchup. I learned quickly to pull half the skin off the bird to avoid too much grease. I learned apple cider vinegar is the trick to a great BBQ sauce. More recently, (and most importantly) I learned that McCormick’s sells “Slow Cooked Pulled Pork” seasoning packs that when mixed with ketchup, apple cider vinegar and brown sugar is amazing. 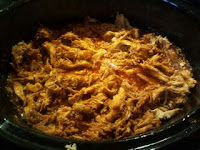 So try something different, throw a half-skinned turkey breast in the crock pot with two packets of seasoning as prepared above. Cook on high for 1 hour and then on low for three more. Remove the turkey and scrape off the meat with a fork. Scoop up the pile of shredded meat and put it back in all of those great drippings for another half hour on low. Crack open a fresh loaf of Italian bread and stuff it! All the flavor of a pulled pork sandwich with half the fat.

As I mentioned earlier, life without beef and pork is easier these days. There are so many alternatives available in the grocery stores. And I admittedly feel above it all when I see someone inspecting a package of ground chicken with that “what can I do with this” look on their face.  I am almost always tempted to offer some unsolicited advice. I am the master of the Fowl Cow (a cookbook I was going to write on all things poultry till I realized it sounded like a book on bad beef!) But my real fortune in all of this has been to live within 15 minutes of the Reading Terminal Market where Godshall’s Poultry Market has everything from turkey pepperoni to turkey liverwurst and a turkey bacon that taste like sweet, smoked ham. The Amish have mastered the art of converting poultry to…well almost anything!

Now, years later, has my husband’s decision to give up red meat been worth it? Well, I will tell you this, two weeks ago I was sitting in the waiting room of a local hospital while he was having a colonoscopy. When the procedure was finished, the doctor approached me with a smile and said “now that is the colon of a man who has not had red meat for the past 20 years. ” He added, “It is like a super clean, well maintained highway”.
“I know”, I thought, feeling satisfaction, “I am driving the street cleaner”.