Proud to be from the State of South Jersey

Ok….so the title is a bit of wishful thinking. But if you’re not from the area, you need to do know that New Jersey is divided into two portions; New York and Philadelphia. I am from Philadelphia, kind of. I live in the southern portion of New Jersey which has a Phillies Red summer and an Eagles green fall. Not like up north where they wear Yankee hats year round and root for the NY Giants and the NY Jets, both of whom actually play home games in New Jersey…in the same stadium. One that was just built to replace an outdated venue…that was also in New Jersey. I won’t even question the logistics of this cross-state maneuvering since I recently found out that the Cincinnati Airport is in Kentucky.

Anyway, I get my coffee from a WaWa (not a 7 Eleven!), and summer at the Jersey shore (not that Jersey Shore – they are from the New York portion of New Jersey). You may need to get out a map to follow me.

Recently, a friend from the northern portion of our state spent the day with me. We have an ongoing banter about which part of the state is worth our highest-in-the-nation property taxes.  Hers are higher than mine because property values are higher – much higher in northern New Jersey. “That’s because we have mountains, rolling hills and horse farms, she brags, “You have oil refineries”, I respond. New Jersey Turnpike Exits 13, 14, and 15. Check your maps. And so it goes, back and forth, neither surrendering an inch. It has been going on for years. Fortunately, we have much more in common than both living in a state where the Governor recently responded to a heckler with “You can’t insult me, I’m from New Jersey”. ??? 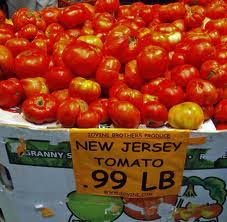 But as I was fixing us lunch, a whole new north/south “claim to fame” topic came up. I had fried up some wonderful hard-wood smoked bacon that I actually bought from a butcher in (real) Philadelphia to make BLT’s. Since it was winter, as I was preparing our sandwiches, I lamented “I would love to have a Jersey tomato right now.” She smiled, “another great produce from the north”.  Okay….. North Jersey can lay claim to Bruce Springsteen, the Soprano’s, the Cake Boss, Frank Sinatra, MTV’s Jersey Shore and even part of the Delaware Water Gap! But not, not the Jersey Tomato!

My laptop was on the center island where we were about to eat lunch. I stopped what I was doing to research this statement. “Hey, I’m hungry”, she bellowed, “You are also ill-informed” I responded as I Goggled “Jersey Tomato”….and there it was in all of its’ sweet, sweet splendor! This summer fruit (yes class, seeds inside make it a “fruit”) is legendary for its juicy sweetness.  And come July, a tomato, a little olive oil and a salt shaker - is lunch.  We read through the history that would settle this latest debate. It proved that even as the 5th smallest state in the country, New Jersey is the 4th largest in tomato production, and they are “mostly grown in Gloucester, Cumberland, Salam and Atlantic counties” ALL IN SOUTH JERSEY.  We ate in relative silence, occasionally mentioning the weather. 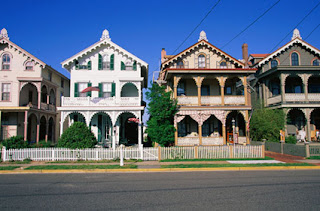 Southern Jersey lives in the shadow of its’ northern half. We are a cluster of suburbs surrounding the Pine Barrens, blueberry fields, peach orchards, cranberry bogs and road side stands that sell silver queen white corn and blue claw crabs. Our shores are crowded with families. At our most southern point is Cape May where huge Victorian homes dot the landscape of the oldest seashore resort in the nation.

Up the turnpike, the other half of the state provides us with politicians, state lottery winners and a reputation that often makes us the butt of late night talk show jokes. I’m beginning to think that the people of the great states of the Carolinas have the right idea!

“That was a good sandwich, but you are right about one thing”, my old friend finally admitted. “It would have been better with a Jersey tomato, even if it was grown in the southern half”.  But then she couldn’t resist, “Did you know that Merle Streep was born in North Jersey?” It never ends.
Posted by Jo Ann Phelps at 1/28/2012 08:42:00 PM