I, like many, have a microwave oven that is mounted over the stove. And like everyone else’s it has an exhaust fan and light, features I use almost every day. The bothersome part is, when I turn the light off at night, a little digital display runs across like a movie marquee, which reads “Light is now off”. Did I pay extra for this feature? I know it’s off. I turned it off. I actually have to stop myself from and saying “duh”!! And there is no way of controlling my microwave from stating the obvious.

It got me thinking….how many things slip into the products we buy, that we simply don’t need? So I poured myself a third cup of coffee (didn’t really need that) and started making a list. Since I was sitting in it, the kitchen seemed a great place to start. First thing I noticed is that time was on my side….literally. To my right, both the stove and the know-it-all microwave have digital clocks. In front of me, the coffee maker, the radio/cd player and the refrigerator door also have digital clocks. To the far left, hangs a wall clock that chimes on the hour, so even if my eyes miss one of the five digital displays, my ears will at least know what time it is. I swear, I never realized how many clocks were in my kitchen until this little experiment. Not even when I have to reset them twice a year!!! 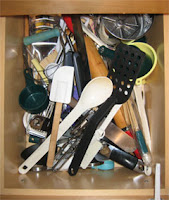 Ok, I’m calmer and back on task – almost. My train of thought has altered slightly to wondering how many duplicates are in my kitchen. How many things are shoved in cabinets and drawers that I don’t need at all? Apparently, a lot!! For the record, my husband and I are empty nesters, sort of. We still have one bird hovering that occasionally lands to sleep and bathe, but most nights, it’s just the two of us. So, I am going to allow myself some grace in that there are going to be things I’ll find that I bought when I was cooking big meals every night. Things I thought I needed at the time….

……but even I can’t explain five garlic presses. Five. Different colors and sizes, but still all with one mission, crush a bulb of garlic, something I actually do now with the flat end of a butcher knife and my fist. I found three beaters for a hand mixer that only holds two. Only one of them fit. I found two cords for an electric frying pan that I no longer have. I found the plastic scraper that went with the original George Foreman grill. The one I gave to my son when he went away to college seven years ago. It didn’t come back. The grill, I mean.

I found three cheese graters, two zesters, three potato peelers, and six bag clips. In the back of one cabinet I found the Teflon plates that went into a waffle iron I threw out last year….because I couldn’t find the Teflon plates. I started piling all the things I didn’t need any more in a box. My thought was to put the box in the garage and sell the stuff at a yard sale in spring. I knew in my heart that some, poor, misguided woman who only had three garlic presses at home, would buy one more. What I didn’t initially realize is that I would need more than one box.

At the end of the day, my kitchen was lighter and my garage was full. After removing all the “extras”, I wiped out the drawers and cabinets and organized the remains. At first, I felt a sense of accomplishment. I spent the entire day getting rid of some of the clutter in my life. If there was something I had more than one of, I kept the most effective one, and discarded the rest. 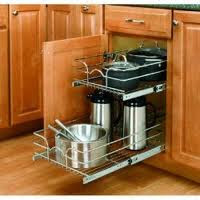 I sat down amazed at how many unnecessary kitchen tools I bought when I was cooking for my family every night. I must have viewed them as essential “little helpers” in getting dinner on the table quickly after working all day. These days, I still work, but am much more relaxed in preparing dinner for just the two of us, although admittedly, I miss the chatter that once surrounded our table.

But, still, I am so quick to stop at any culinary store containing isles of kitchen gadgets and search for that “must have” item. And sitting here, I’m stunned to realize that in spite of everything I’ve bought, all I ever really use are a sharp knife, a cutting board, a zester and my hands! I never really needed anything that is now sitting on the garage floor. This is a life altering reckoning! A true “light bulb” moment!

Just then, my eye caught the attention of a man on TV who was slicing a tomato on, what he called, “the mandolin” Not just tomatoes, but, potatoes, onions, cucumbers, etc. How cool was this? I went to get my laptop for some online shopping and on the way out of the kitchen, I turned the light off over the stove. “Light is now off” Yeah, pretty much.
Posted by Jo Ann Phelps at 2/19/2012 10:06:00 AM