There are most likely unimaginable perks to being famous. Being human isn’t one of them.  Take into account a recent “incident” that happened to entertainer Marie Osmond….on stage! A few days ago, Marie was doing her Vegas-style show on a cruise ship with her brother Donny, when the unthinkable happened. During the audience participation portion of the show, a question was asked that made both Marie and Donny laugh hard – really hard.

Being a man, for Donny this wasn’t a problem. For 53-year-old, mother of 8, Marie, it was a big problem. She laughed until she wet herself. And not a hide-able spritz, but a gusher that ended up on the stage floor….and on YouTube, and Twitter, and Facebook and Entertainment Tonight! It was visible to all, especially brother Donny, who then fell on the floor with laughter (carefully avoiding the puddle).

And to her credit, Marie laughed too. Not only did she laugh, as a stage hand ran out with a rag, she took it from him and cleaned up after herself. Kudos to you Marie! You need to make no excuses or apologies. And you must know by now, you are not alone!

For the sake of Marie Osmond, my new hero, I will explain; Two years ago, a group of us was traveling to Frank Lloyd Wright’s “Falling Water’s” outside of Pittsburgh. (If you haven’t been there – put it on your “must go” list!) Anyway, after traveling about three hours, we decided to stop, use the bathrooms and get a bite to eat. In our car, two friends and I had been chatting the entire ride and it didn’t stop when we exited the car. We walked through the parking lot, totally engrossed in conversation, and kept moving right into the lobby, aiming toward the restroom without missing a word. After almost three hours on the road and a 20 oz. coffee, I was ready for relief.

As we were talking, we walked into the restroom, right past the men that were washing their hands and each took a stall. As I was preparing for duty, I heard my one friend say “hey, there is a urinal in my stall.” Instantly it registered that we past MEN washing their hands. I looked to the stall on my left and saw a pair of work boots on the floor – facing the wall! “Oh, Jesus”, I heard my other friend mutter. By nature, I am a rule follower, so it never dawned on me to complete my mission before exiting. I was in the wrong restroom and I was leaving – immediately. My companions were right behind me. 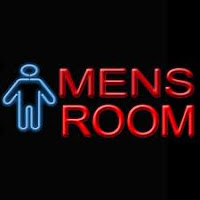 When we got back into the lobby, our men were still standing out there shocked that we had preceded them into the men’s room. The minute they saw us rush out, they started laughing. I was smiling and trying to keep it together, but then a man who had been washing in the sink when we went in, came out and looked up at the door way, where it clearly read “Men’s Room”.“Whew,” he said to his friend, “these three broads came in with such confidence that I thought I was in the wrong room”, and I collapsed onto the wall in laughter. That is when I had my Marie moment. Not on a stage, but the lobby of a rest stop on the PA Turnpike.

This type of incident falls under the “life is not fair” category! Simply by virtue of our gender, our age, and the ability to bear children in our younger years, our bladders defy us when we need their support the most. But maybe, (just maybe), we have the ability to laugh harder and more often than men. At least it seems that way in our group. And if it’s a tradeoff, I’ll take the laughter over dry pants any time. So welcome to my world Marie! You looked in the face of embarrassment, and decided to laugh at it! Proud to have you in the sisterhood!!
Posted by Jo Ann Phelps at 3/13/2012 09:15:00 PM