We're not in Jersey anymore Toto....

Sitting in my kitchen this morning, safely in New Jersey, I am drinking coffee and watching the news report of the devastation parts of this country endured last Friday. I have done this many times before, but this time it was different. This time, I was right on the edge of witnessing first hand the tragedy that nature can inflict. (I refuse to refer to it as Mother Nature, since nothing with a maternal instinct would inflict such pain.)


Let’s go back to last Friday. Each year at this time, my sisters, Betty, Ro, and I, take a road trip to Cincinnati, Ohio, for Betty’s granddaughter’s birthday celebration. Cincinnati is in the southern portion of Ohio, only minutes from Kentucky.  From our homes, it is a 10 hour drive each way. (11 if you take into consideration the age of our bladders) As you can imagine, there is much chatter and laughter along the way. My husband actually came with us one year, but when we got home he said “never again” (I don’t know what his problem is).

But this year, we did have a fourth travel buddy, her name is Siri. If you own an iPhone, you know her as the voice that answers questions that are spoken into the phone. And sometimes, her answers are actually correct. I own a Droid, so traveling with Siri was new to me.  After about five hours on the Pennsylvania Turnpike, we were heading into the mountains of Wheeling, West Virginia when my nephew, Scott called from the Kentucky school where he is an assistant principal. “Just thought you should know that you might run into some rough weather. They are calling for strong thunderstorms and possible tornadoes here later.”

At that time, we were surrounded by sunny, clear blue skies. Meaning, we didn’t take it all too seriously. In fact, using the line from the movie “Twister” (and my Droid), I posted on Facebook, “We have cows”. My younger sister Ro, who usually follows my lead, posted a picture of a flying cow. It was all in fun. My sister Betty asked her new BFF Siri, “what is the weather in Cincinnati?” It was still rather early in the day and Siri assured us that it was just “cloudy”.

So on we went not realizing that we were tempting the weather gods! By the time we stopped for lunch in Cambridge, Ohio it was cloudy with a sprinkling of rain. Ro’s husband, who is an IT manager for a chain of banks, texted her to say that the banks in Kentucky were closing because of the storm threat. “Maybe, I’ll get a picture of an actual cow flying”, she said, and we all laughed and kept heading toward the storm. (Keep in mind, we are from New Jersey, where we often get warnings but very rarely get the storms – hence the nonchalant attitude).

Along the way, Betty was twittering out our conversations, Ro was texting her husband and I was driving down Interstate 71 listening to Adele, starting to feel a little uneasy about the skies ahead. We pulled off the highway in Reynoldsburg for gas and went into the store for coffee. People were coming in buying ice and filling their gas tanks. “What are you hearing about the weather?” I asked the man behind the counter. “Oh, not to worry ladies,“ he assured us “tornadoes are not expected here for about 25 minutes”. I heard myself yelling “what?” as my sister was responding “well, then I have time for a cigarette.”

At this point (and I can’t explain why) looking down in the ice cream case in front of us, I realized that it had been years since I last had a Nutty Buddy Ice Cream Cone. And since this didn't seem the time to watch calories, “what the hell” I said, reaching into the case. I was eating the cone while I convincing my sister that it probably wasn’t a good idea to be standing over gas tanks smoking with tornadoes in the area. We got back in the car and continued toward Cincinnati on I 71.

By now, it was pouring, and lightening was bouncing among the swirling clouds. I told Ro to find a local radio station so we could track the weather. Betty and Siri were not getting along at this point because Betty was asking her about tornadoes and Siri was giving us links to the Wizard of Oz. When a station finally came in clear, music was playing so I figured things can’t be that bad. That secure feeling lasted all of five minutes when the Emergency Broadcast System took over the airwaves. It was the second time in my life that I heard those annoying beeps followed by a message I should actually be listening to, and not hear “this is a test”. (The first time is when I was visiting Betty’s daughter in Florida – I’m beginning to see a pattern here).


“If you are traveling on Interstate 71, please exit as soon as possible as tornadoes are imminent”. The announcer then mentioned mile markers, but I had no idea where we were in terms of markers, I only knew that the storm was directly ahead of us. “I am going to tweet this out and see what comes back”, said Betty. What came back was something like “get off the highway”. We were only a couple miles from our exit, so after a “discussion” the twitterer , the texter and the driver decided to keep going. The best we could figure, the storms were mostly in Kentucky and not Cincinnati.

“Stop arguing with Siri, and call Scott”, I told my sister. “See what is happening where he is”. Even with the EBS telling us to get off the highway... even with a black swirling sky and crackling lightening... even with pounding rain and heavy wind... Betty was not about to let a little storm alter her plans”, “I’m sure it’s fine. They just don’t have tornadoes in Cincinnati” She called Scott who told her that tornado sirens were going off and his family was in the basement…..and we kept going.

We finally got to our exit and started heading south which put the storm slightly to our right, but the rain and wind continue. While driving, I was keeping an eye on the sky which, admittedly, was mesmerizing. Ahead, I saw a flashing red sign. As we got closer, I could read “Honk if you love Jesus” breaking through the dark clouds. Things being what they were, I figured it was a good time to lay one big blast on the horn.


Well, we made it, thankfully. By the time we arrived at my nephews, the storm had aimed its nasty head over Kentucky and Indianapolis where many lives and much property were lost. Knowing the fear I felt just watching this thing forming overhead, I can’t even image how those poor people felt as the tunnel clouds came directly at them. I love New Jersey. 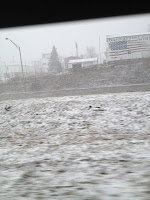 The weekend was great, with the exception being that the relationship between Betty and Siri had reduced to name calling (on Betty's side). As we were packing the car to leave, I was just thankful that without those awful storms, the ride home would be void of stress. That's when Ro looked up and said "hey, I think it is starting to snow". And it did...most of the way home!
Posted by Jo Ann Phelps at 3/07/2012 02:23:00 PM