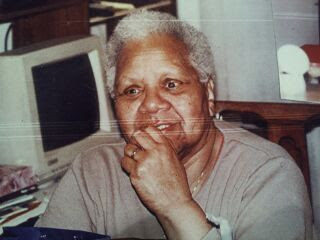 I don’t remember the moment I first realized how important she was to me. After all, I trusted her with two of the things I hold most dear in life-my sons. I don’t remember the exact moment she crossed from being the babysitter to being family. But it happened. And not just in the “oh, she’s just like family” vernacular. Oh no, she was family. We lived in adjoining townhouses, so proximity wasn't an issue and in 15 years, there wasn't a day, or at least part of one, that we weren't together. I guess you could say that Louise and I sort of adopted each other.

She had two grown sons who, for whatever reasons, weren't very active in her life (and that was definitely their loss). She didn't have a daughter, and I lost my mother when I was a young child. I had two babies 11 months apart, and was slightly overwhelmed with a husband working two jobs to keep them in formula and diapers. Louise didn't drive. I not only drove, but had a car. And as long as she was willing to help with one of the two occupants in the adjoining car seats, she was welcome to come everywhere the boys and I went. And she did!

In an old station wagon that we jokingly referred to as the “red bomber”, the four of us would take to the road when I finished my part time morning job and head to the grocery store, K-Mart, the park or to Sunnyside Dairy Farm for ice cream and milk. It didn’t matter. We always planned some small outing requiring very little money, and made the most of it.

We started each day together, and it would usually end with the two of us sitting on my front porch watching the kids catch lightening bugs on summer evenings, or chasing leaves in the fall. There wasn’t a holiday or family birthday that Aunt Louise and her husband, Bill, didn’t spend with us. And, oh, those backyard barbeques featuring her favorite blue claw crabs! “Talking and chewing”, she liked to call the hours spent around the table telling stories and laughing. In later years, she revealed that those table time chatters were among her favorite memories.
Among my own favorite memories is that when you walked into Aunt Louise and Uncle Bill’s house, the buffet in the dining room was loaded with pictures of my two white, blond haired boys. How odd that must have seemed at first to her own family when they would visit. But to Aunt Louise, it was the way it should be.

The boys, walked in and out of her house at their leisure. Whether climbing up to the table for breakfast and letting Uncle Bill put hot sauce on their eggs, or spreading jelly on cornbread that Aunt Louise made in a cast iron pan, it was an extension of home to them. Literally, only a wall separated our two dwellings. From the time they were infants and could open their eyes and see her loving brown face, the boys were truly at home in her arms.

I actually can’t recall many memories of my sons as children that didn't include Louise. Her unconditional love for my family taught my boys, Trevor and Kyle, a tolerance of all people, an unqualified acceptance that I could never have taught them on my own. It is a character strength that they carry today as men. All the laughter and friendship aside, I am most grateful to her for that.

Sadly, Louise is gone now. But as a tribute to her for this Mother’s Day, I will tell you her most favorite story involving my son Kyle .She would tell it to everyone and anyone who would listen. Louise, this one is for you.

When Kyle was four, he was attending a pre-school, that Uncle Bill and Aunt Louise would take him to while I was working. One February, they were learning about black history. They were given coloring books with figures such as Martin Luther King, Eli Whitney and Rosa Parks. He brought the book home to show me. We were going through it when he pointed out that the teacher told him to use a brown crayon to color their faces.
“Why did she do that?” he asked me.
“Well, because they are African-American and they have darker skin then us, “I explained to him.
“Is Aunt Louise African-American?”
I was kind of waiting for this discussion, “yes, she and Uncle Bill both are”.
He sat quietly for a minute, and then asked “are they different from us?”
“I don’t think that they are, do you?” I asked him.
His hesitation surprised me a little, then he answered a firm, “No”
But then, he leaned in and lowered his voice. He seemingly wanted to let me in on a secret that only he knew. “There is one difference” and then leaned closer to my ear.
“When black people pee, it’s blue”.
“What?” I asked, not quite grasping what he was saying.
“Whenever, I go to the bathroom at Aunt Louise’s, I look in the potty and it is blue in there”
When I stopped laughing, I explained to him that she used a toilet disinfectant that I didn’t use at our house.

He was happy with that explanation and went over Louise’s to have lunch with Uncle Bill. In his mind, any doubt of a difference between him and his beloved Aunt Louise, was gone. And all was right in his world.

Today, the buffet that held the many pictures of the boys sits in my house with a picture of Louise on it. It’s in the dining room, where she loved to spend her time “talking and chewing”. Throughout our home, there are pictures of her at the boys' sports awards, Christmas plays, zoo trips, and as they got older, graduations and proms. We are all so ever grateful for the blessing of her presence in our lives.
I miss you, my dear old friend. Happy Mothers Day.
Posted by Jo Ann Phelps at 5/10/2012 09:05:00 PM