At first, it all looked rather innocent. A beautiful spring Saturday morning finds my husband sitting at the kitchen island with a cup of coffee and a golf magazine. “Morning”, he says as I come down the steps and head straight for the coffee pot. “Any plans for the day?” He’s in a good mood, I thought to myself. “Well, I was thinking, maybe we could…..” and then I caught myself in mid-sentence. Hidden under the golf magazine and behind his coffee mug, I could see the corner of his brown leather wallet. He tried to move it with his forearm, but it was there. The evidence is mounting. It’s early morning… coffee is made… kitchen TV is on… and he is in a really good mood… all leading me to the question I have to ask every few months…..”What did you buy?”

My husband, a man who has safely  invested every cent of every raise he has received for the last 10 years into his 401K, a man who, when it is his turn to grocery shop, sits and cuts coupons from all three newspapers delivered on the weekends (something I never do). A man, who every night empties all his change into our “travel” jar - is a sucker for infomercials.


I’m telling you, the man would buy a parcel of land on an Alaskan glacier if it was being sold at 2 a.m., by a stranger promising water front property after global warming sets it. Age, as with so many of us, has altered his sleeping habits making them a bit of a challenge. Hence, there have been many late night “shopping sprees” even more in the very early morning hours. 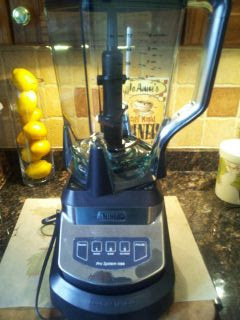 Realizing I’m onto him, he announces “It’s going to be your Mother’s Day gift!  It should be here in a few weeks.” At the time, Mother's Day was still several weeks away, but he always tries to target purchases around a holiday or birthday so as to anoint them as a "gift".A sly and manipulative move since it's harder to say "Are you freaking kidding me?" when someone is handing you a present.


But I’m a little confused. “I thought the combination weed wacker/blower/tiller that came last week was going to be this years Mother’s Day gift!  He chuckled, “Oh no, I saw the look on your face when you opened it and thought I should go in another direction. This is something you will really like!” Bless his poor, kind, delusional heart.

And true to his word, I came home from work  just two weeks before the famed May holiday, and a brown truck was just pulling up to my house. “Hi Jo Ann, how you doing?” the driver said gathering the box from the truck and setting it on the front step. “I’m good Dennis, how’s the new baby doing?”….. (I can’t place all the blame for being on a first name bases with the UPS guy on my husband. I have a little problem with Amazon.com). I then carried the box in the house and set it down in the living room where we walked around it for a week without a mention.

Then, with just one week to go before Mothers Day, I came home and found my husband and my son  eating pizza. Homemade pizza. “Oh, that looks great”, I said amazed at the aroma. “How did you make the dough?” And my husband smiled and pointed to the counter where what looked like an overgrown blender was squatting. “Here is your new Ninja blender, slash juicer, slash dough maker, slash food processer, slash smoothie and ice cream maker!”, he beamed. (All of which I have individual versions of – that he bought). I guess they felt the need to demonstrate "my gift" before wrapping it “Wow, that’s really something.”  I muttered. “Yes, it is,” he replied lifting off the lid and pointing his finger into the huge plastic cavity. “We made the dough in there-cleaned it up, made the sauce in there-cleaned it up, then put a ball of mozzarella in there, and cleaned it up.” The words “cleaned it up” were still resonating in my head when he added, “you can make a whole meal with just one item to clean”. Yes, but apparently several times. 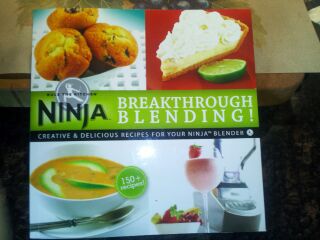 “And it’s called the Ninja?” I asked. “Yes”, my son answered. “And the blades are really, really sharp so be careful washing it, every time”. I then saw the Band Aides on the table. I hope the Ninja doesn’t clash with the Samurai knife sharpener that Dennis delivered three months ago. “And…”, my husband, now reaching for something else said, “this cookbook, a $35 value, was free because I bought this online. It’s not available if you buy the Ninja in a department store.” Macy's sells the Ninja? So pleased with himself, he was. I had to smile.

And, I must admit, the cookbook looks intriguing. My son, a professional chef, said the dough was the easiest dough he has ever made. Recipes include, roasted tomato & olive bruschetta, chicken tortilla soup, and frozen white sangria. If the recipes and the Ninja live up to my sons and husbands recommendations, this one might be a keeper (and not something I sell at a yard sale when he is golfing.)

So it's all good and we are all happy....this time. But only a few nights later, the anxiety started all over again when I was laying up in bed reading and my husband yelled up "Hey hon, have you seen my wallet?"