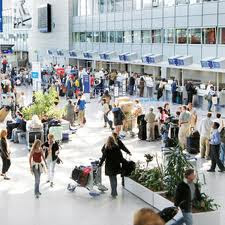 In the past several years I have been fortunate enough to travel to areas of this world I had only dreamed about before; Italy, Ireland, Alaska, San Francisco, etc. Plus two or sometimes three times a year I fly back and forth to Florida to visit family. Point being, I am no stranger to airports. But recently, I did something that I have never done in 50 plus years. I traveled alone. No husband, sister or friends to chat with. Just me. And quite frankly, I was amazed at what I have been missing.

I was flying back from Florida to Philadelphia, and my ears started tuning into conversations around me as I was standing barefoot and getting frisked by security guards. “Look”, an elderly women standing behind me said, “They pulled that lady over. I wonder if her name came up on some list. Hope she’s not on our plane.” I wanted to assure her that I was on no one’s list and was safe to fly with and that I, for some unknown reason, always get singled out for that extra measure of security at the airport…but at the time a TSA officer’s wand was rolling up my inner thigh and defending myself seemed pointless.

After my intimate greeting by security was over, I quickly found my gate, took a seat, and started the pretense of reading a book. I had my iPod headphones on but decided to remove them so I could hear what was going on around me. Seated nearby was a young couple dropping lines like “I never thought I would be doing this” and “I don’t know if I can do this”. I was sure they were flying away for some illicit affair, but as I listened more intently I found I was wrong. Dead wrong.

As the conversation continued, I learned that they were two corporate interns flying to Philly for a project that when completed would award only one of them a paid position with the company. They had worked together for months, become friends, and now had to compete against each other, on the same project, for a permanent position. Not sure I’d want to work for that company.

Other tidbits of conversations included:
“I told him, I don’t do that on the first date, I may not even do that on the second date” Wasn’t sure exactly what “that” meant, but judging by her purple highlights, piercings and visible tattoos, I probably don’t do “that” at all.

From two people sitting in their wheelchairs being pushed by airport employees. "As soon as we land, we are climbing on a bus and heading to the casinos in Atlantic City". I guess some disabilities are limited to airports.

Then my seating group was called to line up and while standing there, I overheard a conversation that hit home. Words and thoughts that occupied my mind for the three hour flight, and for days to follow. Two women in front of me, one about my age and the other older, started a dialogue. Strangers to each other, but still, revealing very personal information.

“I’m excited to be going home to Philadelphia. Haven’t been there in a couple years.” said the younger of the two. “Me too.” replied the older women. And then she asked the younger one “How long have you lived down here?” She sighed and then answered “About five years. I moved after almost having an accident on a snowy road. I told myself ‘enough is enough’, and packed up”. I wanted to add that it only snows two or three times a year in the Philadelphia region, but there are 90-year-old drivers on the road every day in Florida she should be more concerned about, but decided to remain quiet and continue to listen. “How about you,” she asked the older traveler. “Well, I have been living down here about three years.” “Do you like it?” she was asked. “No, not at all. I miss my family.” And then she dropped the bomb.

“See, my sister and her husband were snow birds down here for years. Then they finally decided to buy the condo they always rented. This was about the time my husband passed away and I felt a need for change, so I bought one in the same development.” The younger women tried to add encouragement “Good for you!” The older women slowly nodded her head, “Not really. Two days after I made settlement, my sister and her husband backed out of their deal and decided to stay in Philly. Now, my sister, nieces and nephews all live up north and I am down here alone.” She looked out at the plane pulling into the gate. “That is why I am going home for a visit.” Home is where you live, not where you visit. My heart broke for her and the injustice inflicted upon by her sister and brother-in-law. The subject topic brought me back to an intense conversation with my husband a few weeks prior.

After 38 years of marriage, we have hit upon a topic we just can’t agree on…retirement. We are not there yet, but in the next few years, some hard decisions have to be made. He wants to sell our home, downsize, and move to a state with lower property taxes….and I don’t. I love my home and want to stay near my family and friends. It is a huge divide between two people who have managed to work through anything and everything over the years. I’m sure we will find some common ground here, but for now, I am done listening in on the conversations of others. The thought of “visiting home” is more than I can handle. I put my headphones back on.