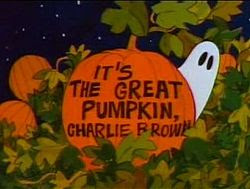 I get so caught up in this time of year. Anyone who knows me knows my passion for fall. There is very little else that makes my spine tingle more than orange and crimson colored leaves, blue skies, cool temperatures…and pumpkins!  October rules in my book! Between the heat and humidity and having to scrap ice off my windshield, is this most glorious month that speaks to my soul. Sadly, this month is coming to an end way too soon. Now for children, the end of this month is what they have waited for. The excitement, the costumes, the candy and fun of Halloween make the wait for this last day of October almost unbearable. Not so much for me.

But I do remember this excitement with my own boys and it started with the viewing of  “It’s the Great Pumpkin, Charlie Brown”, Back in the day, when their ages were still in the single digits the anticipation of watching the Charlie Brown Halloween special came only second to Christmas morning.

Now, I have always believed that Charles Schulz wrote his cartoons and specials more for adults than children. I mean, what women can’t associate with Sally who after being deceived by her “man”, by convincing her that waiting for the Great Pumpkin was more rewarding than trick-or-treating, stands under a full moon and shouts “I believed you! What a fool I am. I WANT RESTITUTION!”

Or Charlie Brown telling Lucy who promises to hold the football steady while he kicks it...which she never does. “I don’t mind your dishonesty half as much as I mind your opinion of me”. Come on! These lines are life lessons! And, for those of us who tend to leap before we think, that sage advice from Linus who disappears into the colorful fallings of a tree with a taffy “Never jump into a pile of leaves with a wet sucker”. So true.

Charles Schulz’s alter ego Charlie Brown has given us words to live by. Now, what my sons got out of it I’m not sure. They actually gasped the first time they saw Charlie Brown get rocks in his bag instead of candy. I can remember my six year old son Trevor actually standing up in his pajamas, outraged “Ah dag, that sucks!”  His younger brother Kyle was more worried about the reality of it just days before he went trick-or-treating, “Would people really do that Mom?” I recently found out that my boys weren't the only children ones traumatize by a kid receiving a rock instead of a Reese’s cup upset by that scene.

First aired in 1966, people from all over the country still annually send candy to CBS studios, marked “For Charlie Brown”. But again, lesson here is that even when you’re young, sometimes life just isn't fair. I know that feeling because it is just how I feel this time every October. The days are so much shorter. It is almost a crime against nature that just when the landscape is bursting with the colors of fall, darkness comes so soon. So, gone will be the brilliant red twilight skies of autumn, golden trees, and leaves swirling down the sidewalk.

Linus would have understood my passion for October because it is the very month that he holds his annual ritual of waiting for The Great Pumpkin. "I don’t see how a pumpkin patch can be more sincere than this one. You can look around and there’s not a sign of hypocrisy. Nothing but sincerity as far as the eye can see." I couldn't agree more Linus.


All images provided by ImageGoggle