I have just returned from the sunny state of Florida where the temperatures were in the 80’s (unusually warm for even that state this time of year) and where Florida people in their shorts and sandals like to tell northern visitors that “this is life in Florida”…and it is, for three months of the year anyway. Even I, who am a confirmed lover of four seasons, enjoyed the sun’s warm rays, the Gulf’s soft breeze and seeing colorful purple, pink and white impatient’s in full bloom.  I thought Florida was a great place to spend part of January…until I picked up the local newspaper.

Now, my home state of New Jersey, as well as the neighboring state of Pennsylvania, often  host deer hunts to control the population of this otherwise adorable but amorous creature, especially this time of year, when they are often dangerously seen chasing potential mates across major highways in pursuit of…well, we’ll just call it love. So I get the premise of controlling certain animal populations at gun point. Trust me, I know many women who in hindsight…well, never mind, you understand.

But last Saturday, the sunny, citrus-rich state of Florida, had to host a python hunt. That’s right, in an effort to control an exploding population of these 7’ to 15’, several hundred pound stranglers, Florida held a hunt down in the Everglades. Apparently, residents who foolishly bought the snakes when they were small, only to find them a little hard to feed and control has they got bigger, released them into the swamps where they have over populated and, have now, nearly wiped out all small prey for meals. One hunter said, “You can ride for miles and not see any small life form.” It is illegal to release them now, but the damage is done and they have a slithering mess on their hands.

And be it a garter or anaconda variety, I don’t want anything to do with them. So this story was of great interest to me because I read that these large snakes have migrated has far north as Fort Myers. Since I was staying in Naples, about 30 miles south of Fort Myers, I was very careful where I walked.  Not fond of extreme heat and humidity, January was my “safe” time to visit family in Florida, now, as someone well known for her aversion to this form of reptile, I’m not so sure.

Not that coming back to New Jersey has brightened my January outlook. First, a fogged-in Philadelphia airport kept me in Florida five hours longer than I wanted to be. I sat In the Fort Myers airport keeping an eye on the runways to make sure there was no migrating monster coiling itself around the wheels of my plane. 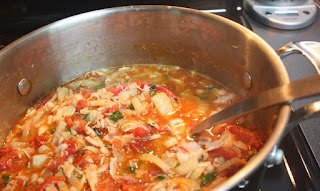 Then, on my second night home, I woke up around three o’clock in the morning with what felt like a Brillo pad stuck in my throat. I couldn't even swallow my own spit! By morning, fever and chills followed and I officially was down for the count. Like most real women, I still found the strength to rummage through the freezer for some chicken parts, chop up some celery and onions, and make some homemade soup. It's what we do when someone is really ill...even if it's us.

So I lay curled up on the couch with a box of tissues, a cup of tea and an unpacked suitcase still upstairs. As social media friends shout out home remedies to fight this thing, I remember my Dad's classic hot lemonade, with lots of honey and a shot of whisky. He would give it to us at night and in the morning we would wake up soaked with sweat and feeling better. Really just a primitive form of NyQuil, but still, very effective.

Okay...so my plan to rock 2013 is getting off to a somewhat shaky start. But there are still almost two weeks left in this first month of the year and I have many promises to keep. So Dad, here is to getting me off this couch and back on my feet. Down the hatch!
Posted by Jo Ann Phelps at 1/16/2013 08:54:00 PM