How to Beat Winter...And the Groundhog! 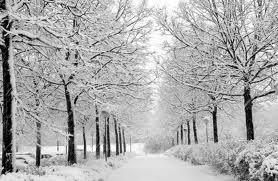 I don’t have much faith in the weather predicting skills of a ground hog. There were at least seven cameras with lights shining on him when the infamous moment came as to whether he would see his shadow or not. I saw his shadow. He didn't  Maybe Punxsutawney, Pennsylvania should spend less money on promotion and more money in getting the little guys eyes examined.

Anyway, it has already been much colder this winter than the last two years. Days are still short, Nights are still long, and the sun is still MIA most afternoons leaving most of us on the grey side. So whether we have just a few more or six more weeks of bone chilling temperatures, we need to find ways to keep motivating ourselves. Let’s face it, winter is Mother Nature’s way of saying “Go to your room and don’t come out until I tell you”. So let’s get a little rebellious and find a way to get around her!

1.       Get up! That’s right, take off the afghan, put down the tea and get off the couch. It is going to be a looooong six weeks if you plan on spending it with one eye peeking out from under a blanket catching up on the first two seasons of Downton Abbey.

2.       Walk! Exercise is to depression what bleach is to a wine stain (I have experience in both lately), it erodes its presence. Bundle up, put on some gloves and get moving!

3.       Once back home, get cooking! In the last three weeks, over a thousand people have downloaded Kitchen Clatters, two chili and the Maryland soup recipes. Get them going. They will warm the house and the soul.
4.       And with that in mind, invite some friends over. Wine and warming food is a great way to spend a winter’s night. For some reason, we tend to stop entertaining after the holidays and slip into hibernation mode. Break the cycle. Have a party!

5.       And here’s a thought, if there is one in your area, spend the afternoon at a home show. There are so many pool and spa vendors, patio and BBQ contractors, that you will definitely see the light at the end of winter’s tunnel. Just coming home and putting a budget together gets you one step closer to spring.

6.       (Saved my favorite suggestion for last). Eat expensive dark chocolate! Yep. There is a natural hormone known as serotonin which the body manufactures when exposed to the sun. It makes you feel good enough to break out the happy dance. Now here is the best part, in the absence of prolonged sunlight, the amino acid tryptophan which helps promote serotonin, is found in the bean that produces high quality chocolate. Generally, the more expensive the chocolate, the higher the tryptophan count, the less sugar used. It’s a win – win situation for everything but your wallet. So anti-up and dig in!

As northerner’s, most of us thrive in at least three of the four seasons of our geographic setting. But as it takes rain to make a rainbow, clouds to make a spectacular sunset, it takes winter to make spring, summer and autumn the special seasons that they are.  With a little effort and a pinch of imagination, that fourth season can be just as fabulous… okay, or at least do-able. 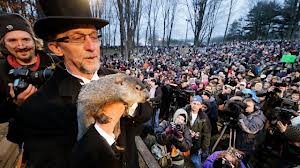 But next February, I’m thinking of stepping outside of my comfort zone and heading to Punxsutawney, PA. I’m always looking for different things to do in the winter and there is a groundhog there that needs to be replaced. I'm breaking out the top hat! I could use the notoriety and apparently good eye site is not required.
Posted by Jo Ann Phelps at 2/03/2013 04:51:00 PM