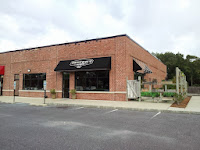 Small business owners are brave warriors in today's world. Surviving in the shadows of large conglomerates and established franchises is not just tough, it can be down-right intimidating. Once knocked down, it is easily understood why small, independent entrepreneurs pick up their stools and leave the ring.

That's why it is so refreshing to see someone like Jim Brandenburger who's restaurant District 611 closed less then a year after opening in Riverton NJ, put the gloves back on, re-do the menu, chef and staff, and seemingly say "okay, let's go another round". And judging by a recent visit, this time he could easily score a knockout!

Jim and wife, Janet, have teamed with top notch talent by bringing in established restaurant business manager Ken Merrimen, and former Le Bec Fin Chef, Dan Maher.  To help make the District more "family friendly" then it's predecessor, a second wood burning pizza oven was installed to help alleviate weekend backups. And while a more traditional style pizza is now available, Maher used his CIA training to keep and enhance popular 611 versions such as the "Little Italy" (a personal favorite) with prosciutto, arugula, figs and a balsamic drizzle over mozzarella cheese, along with an Italian Sausage Broccoli Rabe pizza that is aimed to please a a more sophisticated palate. It hits the target.

Another change to the menu is the "Cozy Comfort" section which was honed to bring home-style meals to those seeking more traditional fare. And to be honest, with pricing competitive with most local diners, the flavors are still off the chart on such standards as "Country Meatloaf" and Chicken Pot Pie. I spoke to one local business person who ordered the meatloaf and mashed potatoes, and then proclaimed it "the best meatloaf I ever had in my life. And at my age, that is saying something"! The pot pie is amazing with a light and flaky pastry covering fresh chicken in a white wine and Dijon gravy with vegetables. It just doesn't get any better.

"Most decent restaurants can pull in customers on a Friday and Saturday," explained Chef Dan, "we needed to create dishes that will bring them in on Tuesdays, Wednesdays and Thursdays as well." The concept of homemade favorites (with a gourmet flare) at a great price, may just be the ticket for those looking for relief during a busy work week.

But for those looking to reward kicked-up culinary expectations, the entree section of the menu is where to focus attention. With choices like the "Sirloin Tower", "Jumbo Lump Crab Cakes", and "Stuffed French Cut Chicken" with figs and blue cheese in a Port Wine demi sauce, it is hard to choose. My dining partner and I went with the latter two and then agreed to share the large portions so we could sample other selections. And although after one bite we both were reluctant to surrender portions of either choice, I'm glad we did. It quickly became apparent that this chef is a true culinary master.

The appetizers such as "Warm Ricotta Flat Bread" made with homemade lemon ricotta cheese, a cheese board, chicken wings and (are your ready for something different?) pig wings, cooked in a spicy Thai sauce, alone are worth stopping by for.

Riverton, a small town with large Victorian style homes nestled along the Delaware River, is a great destination for any reason. In fact, two years ago, Travel Magazine voted it as one of the best small towns to visit on the Forth of July. The renovation of style and menu at the District, is one more reason to get in the car and head towards the river. "We want to be the place that anyone can come to relax and mingle with neighbors and friends while having a really good meal." said Brandenburger.

With a softened interior, a new outdoor seating section and menu that appeals to everyones palate, this BYOB could be just that! Do-overs are never easy, but it is obvious that a lot of effort and thought went into restructuring this dining experience. It deserves a second chance.