Two days after I made settlement on my new home, I climbed over the boxes and left for vacation. The trip had been planned and paid for long before my other house sold, so even though the timing was crazy, it seemed the best thing to do. And, boy, I am so glad I did.

Long a lover of coastal views and lighthouses, I never knew how beautiful both could be when sweeping mountains meet the salt air . It is a true meeting of the natures's masses and I was mesmerized from day one!

Add this to the fact that I was also in search of the perfect lobster roll! I had heard about them, I had seen pictures of them, I have (sorry to say) dreamed about them from the moment we plotted our course north. And although I thought I had a pretty good one in a New Jersey restaurant, the people of Maine assured me that I had not. If you want a great tomato, stay in Jersey. If you want a juicy grapefruit, go to Florida. But if you want a true buttery, sweet and succulent lobster roll, go to Maine. And so we did.

First, it must be noted that spending a couple days in the beautiful Acadia National Park does wonders for the soul. It puts your life, in the main scheme of things, in perspective. It is hard not to sit on a rock, way above the waves crashing on shore and not think of such things. With each slow breath, the ragged edges of a rough year began to smooth and I was grateful to witness what has to be some sort of master plan.

That said, hiking makes you hungry! So back to our quest! Now, you might think that the most important ingredient in a lobster roll would be lobster, right? Well, yes and no, because equally as important is the roll. It has to be, must be, a New England style hot dog roll with no crust and split on the top. Right before adding the lobster mixture it is buttered and grilled and amazing.

So naturally the next ingredient to concentrate on is the lobster! And in Maine, it is everywhere. And, relative to the rest of the east coast, it is plentiful and cheap...in the $3 a pound range. So, during a weeks stay, it can be eaten in some form or the other almost every day. (Yes, we did!)

The mixture that makes a lobster roll can vary from place to place. The three main ingredients are lobster, mayonnaise (just a small amount of mayo is perfect) and chopped celery. My personal favorite had a pop of Old Bay as well, but others added a hint of tarragon, or chopped tomatoes, chopped onion or, as most did, a slight squeeze of fresh lemon right before serving in warm, buttery roll.

The popular hunt for the perfect version of this tourist favorite is evident when riding through many of Maine's small towns, as most roadside stands, some with boats docked behind, all claim "Best Lobster Roll in Maine Served Here"!

I think what I loved most about dining out in Maine was that there is nothing fancy or pretentious about most restaurants. In fact, old clothes are best for pulling up to a paper covered table where lobster juice and butter are sure to join forces below your bib.

Other notables are the wonderfully large and oh, so sweet, bay scallops and shrimp. Okay! So seafood in Maine is abundant, fresh, and wonderful!

Let's go ashore for this northern states other claim to fame...the popover. If you are ever in,or near, Acadia National Park, a stop at Jordan's Pond Restaurant should be mandatory. You won't even have to order a popover, they will bring one for each person seated at the table. It will be served warm from a basket covered in cloth and served with a side of honey-butter. It is both decadent and airy. Their recipe can be found on the internet and I suggest you look for it. The hardest thing about making it is finding a popover tin. They are much deeper than muffin pans and absolutely necessary for baking them. With the holidays coming up, the aroma in the morning will be a great way to surprise your overnight guests! 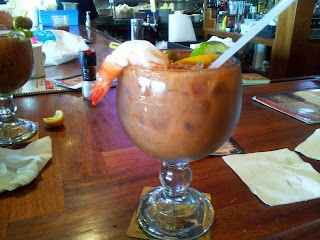 I will end with one more fabulous find in Maine. Bloody Mary's are a passion of mine when traveling. My friends, Karen, Pam and I have consumed and rated them around the world. So far, a small bar on Fisherman's Warf in San Francisco holds the number one spot. But the Bar Harbor Grill, situated on the mouth of a massive inlet, has now moved into second place. Spicy, with olives and shrimp, lemons and limes, this was a true masterpiece! Had they rimmed it with Old Bay, it may have knocked its West Coast rival from the number one spot!