Note: The following is a re-post of one of Kitchen Clatter's most popular blogs. It was picked up by a local paper which then started a Tomato Pie craze! Next week? Celebrate Autumn with a new post from an all new Kitchen Clatter. Please stop by and pull a chair up to the table! 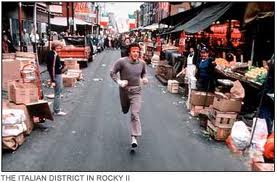 There is a scene in the first Rocky movie where the fighter in training runs down the middle of the 9th Street Italian Market in Philadelphia, and one of the fruit vendors throws him an orange. I thought about that recently as I walked down 9th St. recently. That was 37 years ago, and while there are many more vendors from other country's here now, the concept has not changed from when my grandmother, an Italian immigrant, shopped here over 50 years ago.

The market, in the heart of South Philly, was actually formed in the late 1800’s, as masses of Italian laborers migrated from Italy to work in the shipyards and factories along the Delaware River. Sadly, most, if not all,  of those jobs are gone now, but the market of vendors, who sell produce from wooden carts on wheels, and  line the street in front of butcher shops, bakery's, cheese and spice merchants, remains as vibrant as ever. While many other immigrant nationalities have joined the ranks now, its roots remain Italian. This is still a neighborhood where pasta sauce is simply known only as “gravy”! 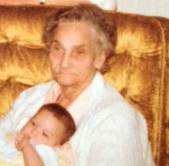 My grandmother, Rose, worked in one of the area factories that manufactured men’s pants, trousers, as they were called then, and did most of her grocery shopping on 9th St. before heading home. As she would say, “acquistare prodotti freschi, cucinare prodotti freschi”, meaning; buy fresh produce, cook fresh produce, and she did, every day. Grandmom was born in Palermo, Italy where marketing was done on a daily basis. And on a recent trip to Tuscany, I discovered that this is an age-old practice that continues there today.

She was a rather large woman, my Grandmother, and could usually handle the bags of peppers, onions, eggplants and fresh sausage (when her budget allowed) in a canvas sack that she carried on the bus to New Jersey. On days that her stamina would exceed her 10-hour shifts, she would walk a little further down 9th St. and get fresh, crusty bread at Sarcones Bakery, which would eventually get stuffed with fried peppers, onions and eggplants. 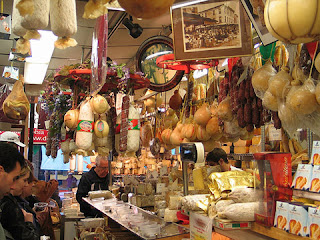 As one of the many grandchildren who would sometimes spend weekends with her, the best days for us would be when she would stop by Di Bruno’s Brothers Cheese Shop and buy a wedge of Locatelli Romano Cheese, a sharp form of parmesan that has a salty bite. She would grate it into small, fluffy mounds, and we would scramble over who would get to eat the last tiny piece that was too small for her to use. To this day, I can’t eat chicken soup without it.

On Friday nights, she would roll out dough, spread on the gravy and load the top with the Locatelli before putting it in her oven. This was tomato pie, not pizza, and it was heaven. While it was baking, five, sometimes six, chattering cousins would roll the leftover dough into balls for her to fry and then roll in sugar. This was dinner and dessert at Grandmom’s and it just didn’t get any better.

On Sunday’s, the day our parents would come to gather us up; we would stand at her apron and roll meatballs to go with the pasta, veal cutlets, sausage, and antipasti that would soon fill the dining room table. Chianti and orange soda were the beverages of choice. The meal would end when my mother and aunts would put out the cannolis and cookies from Isgro’s Bakery, along with an ample arrangement of fresh fruit; all bought in the Italian Market, carried in canvas, on a bus to New Jersey.

It was the sites, the sounds, the smells of 9th street that brought these memories back to me on a recent winter day. The aroma of garlic sautéing in olive oil from restaurants, the warming scent of bread coming from bakeries, and the waft of hickory-filled smoke coming from wood burning in large metal drums along the street, helps keeps the atmosphere of this historic area in a magic type of time capsule. I can’t see it ever changing.

As I walked back to my car, I saw an old women standing at the bus stop with a bag of groceries in each hand. She set them down momentarily to pull her collar up against the winter wind and I couldn't help but hope that there were grandchildren waiting for her to come home.