The Complications of an Empty Nest...

Until recently, for the past 40 years, I was the only female in our house (except for our dog Maxine, who often sided with the male members…except at meal time.) After 9 years of marriage to one male, I gave birth to two more in a 10-month span, increasing the odds against me.
So, for four decades, I was the lone person on defense while the offensive players lined up opposite me. At stake, were meals and clean clothes. (Actually, the clean clothes were my insistence. My sons believed that a spray of Frebreze was all any clothing article picked off the floor needed.)

As for meals, all three of them believed that unless chili had enough "heat" to melt the spoon you were serving it on, it wasn’t hot enough. Chili nights were coincidentally my "Rice Krispies" nights.

Well, my sons have aged out of the system, so to speak, and my (ex) husband has moved on. (I took him from boyhood to manhood; I guess someone else can take him from manhood to Depends). Anyway, while my home is still often full with family or friends, it is mostly me now. And I must admit, I sometimes feel like a kid in a candy store. (Literally, a chocolate bar stays in the fridge for longer than five minutes…um, most days.) But living on my own for the first time EVER, has presented some issues.

Like, when I use the bathroom, is it necessary to close the door? I do, but I never do so without wondering why. I’m on a second floor unit and the front door is always locked. The same thought occurs when I shower. I not only close the bathroom door, I close the bedroom door as well! Why? I think years of only needing to use the bathroom one second before someone else needed to use it has altered my perspective.

And while we are "in" the bathroom (a room that truly exasperates the differences between men and women), I offer the following. As a woman who often witnessed one son exiting the bathroom and getting a thumbs up from his brother for leaving it smelling like road kill, I am thrilled now that not only is the toilet seat always down, the floor around it is clean!! (It always amazed me that both my sons could shoot 3-pointers in basketball at will, and still not be able to hit....well, you know where I'm going with this.) I can burn a fragrant candle without a 12-year old coming out with his finger in his mouth, gagging. On the downside, it is no longer the room I can hide in until all the groceries are unloaded.

For years, my two sons had alternate weeks assigned to take the kitchen trash out. For years, my two sons played trashcan Jenga, each perfectly balancing items as far up the wall as they could before absolutely having to pull the bag up and carry it 20 feet to the trashcan outside. I'm not good at this. I don't know how they pulled the bag up without knocking trash to the floor. As I recently scrapped coffee grounds from the floor back into the filter, I was actually jealous of their skills.

And after years of spending fall Sunday afternoons watching football (which I do like), I discovered that you don't have to suffer watching a team that continues to play badly week after week, season after season. (If you live in the Philadelphia area, you know the team I"m talking about). No, if by halftime you are screaming obscenities and throwing the remote across the room, it's time to pick it up and change the channel! What a concept!

And though 799 channels belong to sports programmers on Sunday afternoons, I promise, the 800th one will show a Meryl Streep movie! How did I not know this before now? Last week by halftime, I found "It's Complicated", this past Sunday, "The River Wild". (I actually didn't have to wait till halftime this week. When watching the game became as painful as slamming my head in the car door, I switched after the 1st. quarter. Only a woman would do this.)

It's not that I don't miss the sound and feel of a family constantly around me, I do. But everyone's
nest empties at one time or another. I'm just getting use to it a little younger than I had anticipated. There are pros and cons to this lifestyle. I use to take cooking classes, now as a first time solo home owner, I recently attended "Beginning Carpentry" at Home Depot. 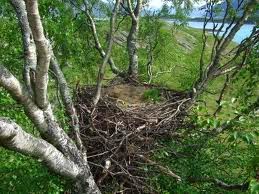 I miss snuggling on the couch, but I absolutely LOVE that there is never a need to compromise. It's my way because I own the highway! One day, I may open myself to the possibility of allowing someone into my life...but not now. And though it really may seem complicated at times, my nest is solidly on the limb...and never really empty. I'm there!

"It's Complicated" photo courtesy of ImageGoggle