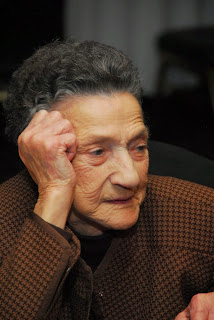 It seems every family has one. Most times they’re called matriarchs, sometimes they’re called divas. My Aunt Lee was both the family matriarch and a kitchen diva, loved by all who would tread softly in her court. Her passion was baking. Blueberry pies in the summer, Jewish apple cake in the fall. Cakes and pastries for her ladies club. At Halloween, she would gather the kids in the neighborhood to bake cookies. This was a trade off so they would know not to trick or treat at her house since a bad hip made it hard for her to get up and down.

But come Christmas, oh baby, the flour would fly like snow! Starting in early November, sprinkles, silver balls, maraschino cherries, pineapple preserves, chocolate buds, sugared stars and anise were among the many ingredients spread out on the counter next to the butter, flour and sugar. Cookie sheets were lined on the table next to an old metal cookie press and Pizzelle maker. We all had our favorites, but tops on everyone's list was Aunt Lee's Ricotta cookies, Soft, sweet and cheesy, these tasteful delights were baked and sprinkled with powdered sugar.

Each day, in the early winter morning hours, she would start her annual ritual of making the dough. And here is where the mystery started... Aunt Lee's cookies were wonderful, flavorful, fragrant, and well, simply delicious. But like most of her recipes, she wasn't too keen on sharing her secrets. "Oh, a little of this, and a little of that. It's hard to say." she would respond when pressed for details. It was her "thing" and gave her much pleasure. Once baked and decorated, the tasty morsels were placed between layers of wax paper and stored in tin containers till ready to present. And presentation was a big deal with her. If you were on her cookie "receiving" list, your tray would come wrapped tightly with sprigs of fresh greens on top, tied with with seasonal ribbons.

And while the cookies were in her oven, you could be sure that chicken soup was on the stove. It was the one demand that her many nieces would insist on when we stopped by. Her and my uncle had built a house, by themselves, from the ground up in the Pine Barrens, near the Jersey shore. When the house was being built, much "cousin fun" was experienced.Sleeping bags lined on the floor in front of the fireplace on winter weekends. Legendary muck fights in the lake during the summer.

A brief history of her legacy is that Aunt Lee (whose real name was Angelina - a name she detested) was my mother's oldest sister. She had one son and no daughters. When my mother passed away at the very young age of 39, Aunt Lee kept me, my sister Betty, my youngest brother Tom, and to be truthful, most of my cousins, under her wing on weekends and summers. But never close enough to see what she was actually doing in the kitchen. Which she felt was her prerogative....of which she had many. She ruled, we eagerly followed, and all was right in her world.

Aunt Lee was a loving and strong women who also fought Crohn's disease for years. The irony here was that this nasty gastronomical affliction often prevented her from tasting many of the wonderful things she made. Its punishment on the body often put her in the hospital where her age and weakened condition would cause us to fear the worst time and time again. On one such occasion, my sister and I were summoned by my uncle to visit her bedside as she seemed to be getting worse. We were standing around her bed quietly as she lied sleeping, when Betty leaned over and whispered "Aunt Lee, how did you make the gnocchi's?" Everyone knew about her unwillingness to share her best recipes, and I believe my sister was just trying to lighten the mood a little...but instead, Aunt Lee opened her eyes for the first time in days. She turned to glare at my sister as if to say "I'm not dying today!" The probing of the ever-light gnocchi's recipe resurrected her. That was nine years before she actually passed...and not the only time we were summoned to her bedside. This lady had nine lives!

I was blessed to have Aunt Lee spend her last several Christmases at my home. She lived about an hour away and would drive up to spend the holiday. Her trunk filled with cookie trays and tins that she would deliver to relatives as I drove her around. What most people don't know is that one tray always went to a women's shelter. "For the kids", she would say. "No one needs to know" and I never mentioned it, until today.

When finished, she would treat me to lunch and a little last minute shopping. It was always a good day. She would also bring some cookie dough to my house so we could decorate and bake them together and so the kitchen "would smell  like Christmas". (Never actually making the dough used for most of her cookies at my house, although under cousins orders, I tried each time to get the recipe). On Christmas Eve, my Uncle Andy, her youngest brother, would pick her up and take her to Mass. A venture she eagerly awaited each year. I can so clearly see her sitting on my couch, dressed and waiting for him.

As she got older and more frail, making the hour drive to my house became too much. It was then that I started picking her up so she wouldn't be alone during the holidays. When I got to her house, spread across the kitchen were cookie trays filled with Biscotti, pineapple squares, butter and ricotta cookies, spritzes, and homemade chocolate truffles, her new passion to make. I would carry some trays to the neighbors and put the rest in my trunk just as she had for years.

It's been a few years since I had to make that trip and I miss her each holiday season. I think of her often as I bake my own Christmas cookies these days. I don't have her recipes, (although the internet has helped me to figure a few out), but the first year without her was when I realized how she had been leaving her decorative tins behind when she went home. I now have most of them.

Another reminder is that at her last Christmas with me, she brought a large wagon table ornament that she had bought the first year she was married - over 60 years ago. It's heavy iron wheels made it hard for her to carry into the house, so she handed me the bag as we unloaded her trunk. "I got this at Strawbridges in the city the first year Uncle Al and I were married, I want you to have it now." I adore it.

Since so much of Christmas is about the memories it creates, it would be hard not to write about her during this season. I am sure that at least one memory of her will be in the mind of my Uncles, Aunts and cousins this holiday. Below, is a ricotta cookie recipe that most closely resembles what I remember as the decadent creation that came from her kitchen.  It took me a long time to find a recipe that equals hers...almost.

To all of the "Aunt Lee's" in the world, a Very Merry Christmas!

In a medium bowl, beat milk, confectioners' sugar, and almond extract until smooth. Spoon over warm cookies, and sprinkle with colored candy sprinkles.