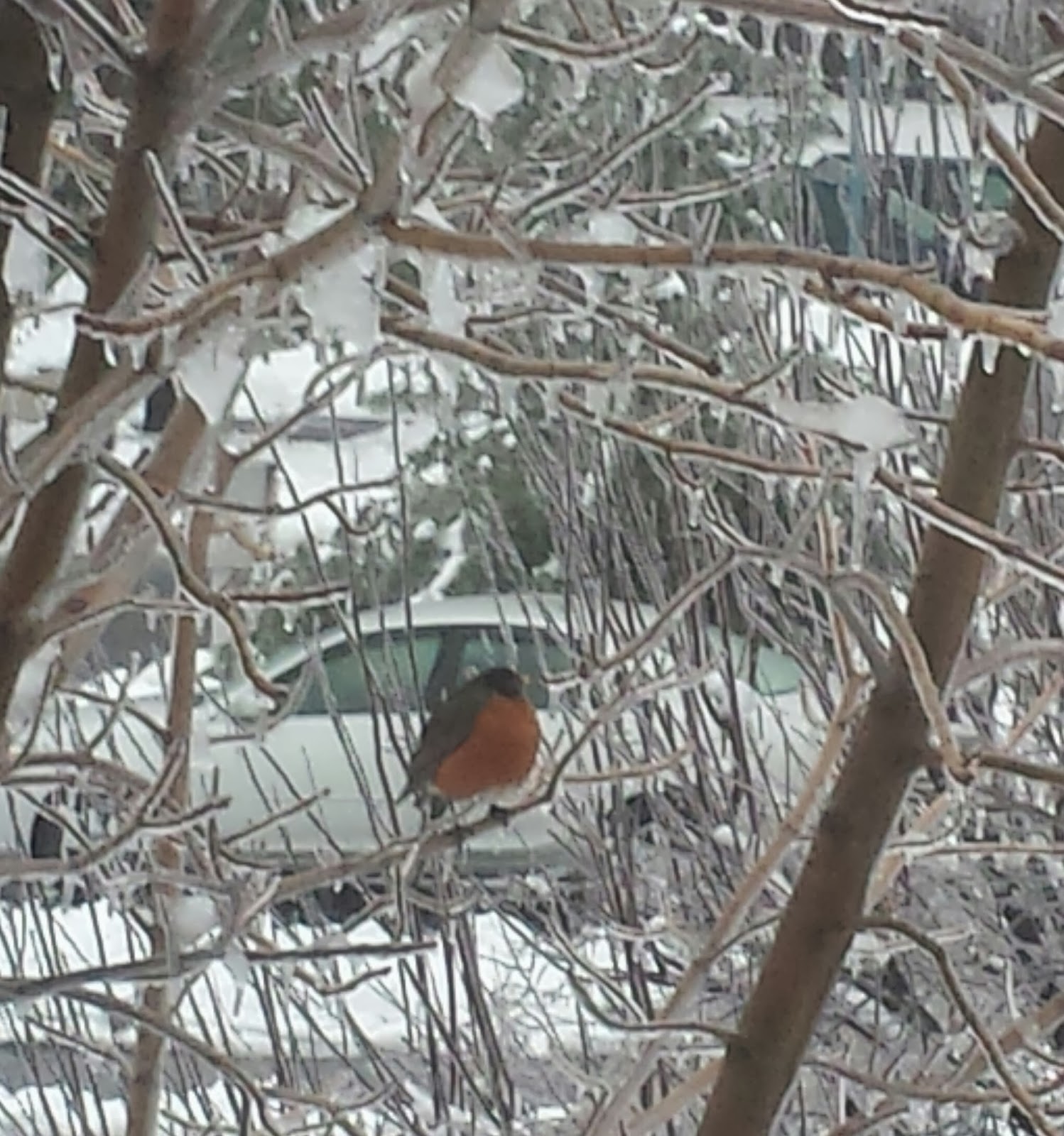 It has been the winter to end all winters. It is now March and we have been enduring harsh conditions since early November. And all of us northerners who claim to love our seasons have been whining. Especially me. We are still shoveling snow when we should be planting bulbs. And it’s getting old.

Seriously, as I write this, there is a small Robin sitting on an iced branch outside of my window, looking in, as if to say “I'm so over this..." He looked pitiful. I stood at the window staring back at him. Neither one of us moved for a very long time. Various shades of grey have been the only colors on this winter's palate, but his defiance to stay on that icy branch with his red breast puffed out seemed to  say...

And it will. This time last year, I was sitting in a septic tank waiting for someone to flush. Less than a year later, I'm far removed from that toxic sludge mainly because of a group of women who surrounded me, supported me, and saved me from swirling down the drain. I am renewed, rejuvenated, and grateful. But now, a hovering cloud seems to be moving around our circle, testing our resolves to remain independent and strong, and I'm not sure how to help. And, trust me, help is owed.

"Everybody's got something" Robin Roberts

And it is true! Everyone has some sort of issue. The perfectly coiffed woman standing in front of you at the store may be ill, or maybe her husband is. Or, worst of all, maybe it's her child whose sick. You just don't know. She smiles and holds her loaf of bread as if her only worry in the world is what to pack for tomorrows lunch. But maybe, (and sadly the odds are not in our favor here) maybe she is standing there in her Ann Taylor suit, holding the bread, and wondering how much longer she'll have a job.

Somethings we can help with, others are beyond us. I so wish the problems plaguing those in my circle now were just relationship issues. We all have something to bring to the table on that topic. The words and wine would flow. But unfortunately, it seems too many women of a certain age are not only wrestling with gravity, they are clinging to hold onto their careers as well. Almost half of my small group is grappling with this problem now, or will be within the next year or two. A climate of corporate mergers have left too many of my friends, both personally and on social media, out in the rain and out of the running.

"Sometimes, life just hits you in the head with a brick" Steve Jobs

Most times, the brick is younger with less experience. And when your position is not being eliminated...your'e just simply being replaced, the force of that brick comes like a cinder block. I'm fortunately not in this situation. Yet. But I find it totally bothersome that this is happening all around me to women of similar age. Ignored are the years of service, the dedication, the early mornings and late nights. Disregard the winter storms and icy roads that they navigated through when most others stayed home. Throw some severance at them and move 'em along. It's more than sad, it's demoralizing.

" I can be changed by what happens to me. But I refuse to be reduced by it." Maya Angelou

For the past year, I have had that quote posted to where I can see it at least once a day. It reminds me that you are not always lost just because the path has changed. We are a resilient gender. I have watched many women, in the past few years, rebound and reinvent themselves when life has altered their course. I know those struggling around me now will do the same. They're understandably worried and scared and I wish I had more than words and a shoulder to offer them.

And all of this was going through my mind as that bird sitting on a frozen branch continued to look though my window. We were eye to eye, neither willing to surrender our spots. It's been a hard winter with a little bad Karma thrown in. We both seem to understand that. But his presence is so much more relevant than mine. I stand inside, protected from the elements, worried about my friends, and he sits on an ice covered branch, his mere existence a promise for brighter and warmer days. He wins.