Wee Bit of the Memories of Ireland

A few years back, 15 to be exact, my friends and I joined in with others who were planning a pub tour of Ireland. A visit to this relatively small but centuries old island had been on my "bucket list", long before that was even a popular term to describe things you wanted to do before you...well, no longer need a bucket. We had read about a group that was planning to land in Dublin, then cross the lush, green, and rolling countryside by bus, stopping at many of its' historic pubs and landmarks along the way. Ireland, pubs and a designated driver! How could we not go on this trip? And so we did.

Travelling through Europe always serves as a reminder to me of how young our own country is. Sipping Guinness from a pint in Durty Nelly's Pub, in County Claire, is surreal. This ancient pub was established in 1620 and since renovated somewhat. But in the rear of the building, an original  room left untouched, boast stone ceilings that barely cleared my 5'7 head. My friends, most taller than me, actually had to stoop over when standing. The popularity of this tiny pub sitting in the shadow of the infamous Bunratty Castle, is so grand that many American bars have tried to duplicate its' ambiance with hearty stouts and rich stews. And although an Irish Pub in Boston comes pretty close (minus the low ceilings) a bucket list visit to this infamous establishment is well worth it.

It is rather hard to travel through Ireland and not be overwhelmed by its history. The stone relics of once grand cathedrals and Celtic crosses, broken, yet strongly embedded in the rich earth. Remnants of age and a centuries old religious war between the Catholics and the Protestants. A fight that still flares in Northern Ireland today. Living in a country whose birth was based on freedom, it is hard for me to comprehend the anger and passion that comes with the struggle to achieve it.

Ireland truly fascinated me. And its people are among the warmest this group has met upon our travels. Sitting in an small  pub outside of Innisfree on a rainy afternoon, resting from a day of shopping on quaint cobble stoned streets, an elderly gentleman in a grey tweed jacket struck up a conversation with me about dreams. I may have written about this lovely gentlemen before, but the final thing he said, haunts me to this day and bears repeating. “I retired a few years ago,” he lamented. “Now, I come down here most afternoons for a pint or two…or three, if truth be told, and dream about things that could have been.” Intrigued, and loving the way the words roll through his thick Irish brogue, I encouraged him to continue. “If you could have only one dream still come true, what would it be?”

His blue eyes twinkled, “Aye, that one is easy. I would buy a plane ticket and fly to New York City?” I was a little surprised. “Really?” He put his pint down and turned to me, “Aye. I would spend a few days in the city and then buy another ticket for a Greyhound bus that was bound for California. I would see a lot of your grand country along the way.” As I looked over at the bog burning in the stone hearth, I couldn't help but think of the irony of our conversation. “Wow”, I said to him. “I am living one of my dreams sitting here in your country.” He picked up his pint and replied…..”Then you dream too small”.

Well, I don't think I dream small at all, but I do manage to keep my dreams in the realm of possibility! His comment left me very conscious of the thin line that lays between a goal and a dream. That being said, every March, the warm memories of my realized dream of going to Ireland come rushing back to me. One especially, with a mouth watering taste that, in spite of many efforts, I have yet to duplicate. 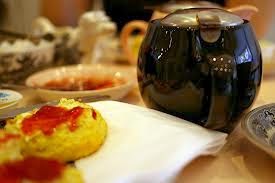 The actual events that led to our ending up there is a little clouded 15 years later, but our entire group was welcomed into the basement of a church where a gathering of ladies were serving tea and scones. And I don't know if it was getting out of the November wind, or the warmth of their famously strong, steaming tea, but the scones were absolutely heavenly. A bite through the light and crusty exterior went into a velvet texture that was simply wonderful. They were served with a strawberry jam equal to nothing I've ever had.

Funny what memories we tend to keep. Of course I'll always remember the ocean view and salty winds on the Cliffs of Moher, the beauty of the Waterford Crystal factory, the endless rolling hills and stoned walls of Ireland's massive country sides. But the laughter of friends, a scone in a church basement, and a conversation in a pub on a rainy day are the memories I treasure.

And with that, I will end with a short poem that I found hanging in a pub bathroom. I scribbled it on a paper towel, that is so torn and tattered, I had to do a little research for some of its words. The author is unknown, but, it's the last line that I often use when mustering courage to face a tough opponent. Another treasured memory...

"Some Guinness was spilled on the barroom floorwhen the pub was shut for the night.Out of his hole crept a wee brown mouseand stood in the pale moonlight.He lapped up the frothy brew from the floor,then back on his haunches he sat.And all night long you could hear him roar,'Bring on the goddam cat!' "
Posted by Jo Ann Phelps at 3/14/2014 08:41:00 PM