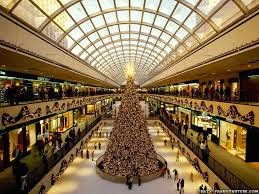 I think if most women are honest, when it comes to serious Christmas shopping, they like to shop alone. At lease I do. Social shopping with friends is fine, but when I'm on a mission, I need to be solo.

I don't know, maybe I can't talk and shop at the same time. But one thing I can do is...listen! I have become addicted to partial conversations. And snippets of Mall talk the week before Christmas are the best.

Shopper #1 "I need to buy a holiday tablecloth cause now I have to put the extra leaf in. What size is the average leaf?"
Shopper #2 "How should I know?
Shopper #1 "Well you invited the extra people! Did you put any thought into it?"
Shopper #2 "Two people, Ruth, Two people! Not a big deal! I'm bringing half the food!"
Shopper #1 "Then you buy the table cloth, and then take it home with you, since next year it is at your house and you can invite as many people as you want!"
Shopper #2 "I already have a big Christmas tablecloth."

They went into a store before I could hear the rest of that conversation, which had an obvious solution Ruth! Along with half the food, tell her to bring her tablecloth! Merry Christmas to two ladies who had to be sisters!

Observing a young girl, excitingly leaving Santa's lap and then digging her heals in when she got to her parents. "Wait, wait wait! I forgot to tell him something." "Don't worry," the Dad said, "I'll text him." Wow, that has to be a popular cell number.

Shortly thereafter, I was walking behind a couple loaded with bags and overheard this:

Ooooh! This isn't going to end well for him.

A little later, as I was sitting down to adjust my purchases, I listened to a boy, about 9 yrs of age, that reminded me so much of conversations I had with my oldest son over grades. I didn't hear the mothers response, but his sentence spoke volumes!"No, what you said was, I would get an XBox if I didn't get a C on my math test. Well, a D is not a C!" You have got to give him an A on tenacity!

My favorite overheard phone conversation (the part I couldn't hear was obvious) "I got it! I had to wait in a long line, but I got it! (Pause) What do you mean you changed your mind? You agreed to pay for half of it! I can't afford this on my own!) Okay, maybe sometimes it is better to shop with other people, especially if you're going in on a gift.

Unfortunately, sometimes, the realization of how difficult this time of year can be for some parents, hits you like a brick to the head. Sometimes, you hear the heart breakers, Listening to a young mother walking past, holding the hand of (I'm guessing) a four year old boy, I observed by her worn shoes and torn coat pocket that Christmas might be a little tight this year. Then, his young but powerful observation moistened my eyes;

Mom - "I told you, Santa can't bring a whole lot this year but he'll do his best."
Son "I guess Santa doesn't like poor kids." Ouch.

Now, on a brighter note, my favorite mall conversation of the season happened between me and my five year old (great) nephew, Drew, the Saturday after Thanksgiving. And it had nothing to do with gifts. Yet his intelligence, presented with such diplomacy, will stay with me always! While is mother, grandmother and baby sister shopped, we walked down to an activity center that was set up in the main mall court to keep kids (and mostly Dad's) busy.

We sat down at a little table (literally, the chair seat was about 12" from the floor. Wasn't sure how I was going to get back up), where he started coloring a tree with the green crayon, I picked up the red crayon and started drawing little round circles over his green tree.

Drew - "What are you doing?"
Me - "I'm drawing red berries on the tree. I think it makes it pretty!"
Drew (looks around and then leans in closer to my ear - so know one else could hear!) "Okay, but let's call them apples because berries grow on bushes."
He's five. I'm not. He wins. I continued to put apples on the tree. I colored in silence so I wouldn't embarrass myself again... at least until I had to get up from the chair.

Sadly enough, the place I expected to hear the most conversations, the food court, was where I heard the least. Most people were texting on their cell phones. Heaven forbid we should talk to the person we're sharing a meal with. Happy holidays! And don't forget, the next time you're talking in a crowded mall, someone might be listening...and then go home and write a blog about you!

PS. There is still time to drop a present in the Toys For Tots boxes for all the little kids that think Santa doesn't like them.