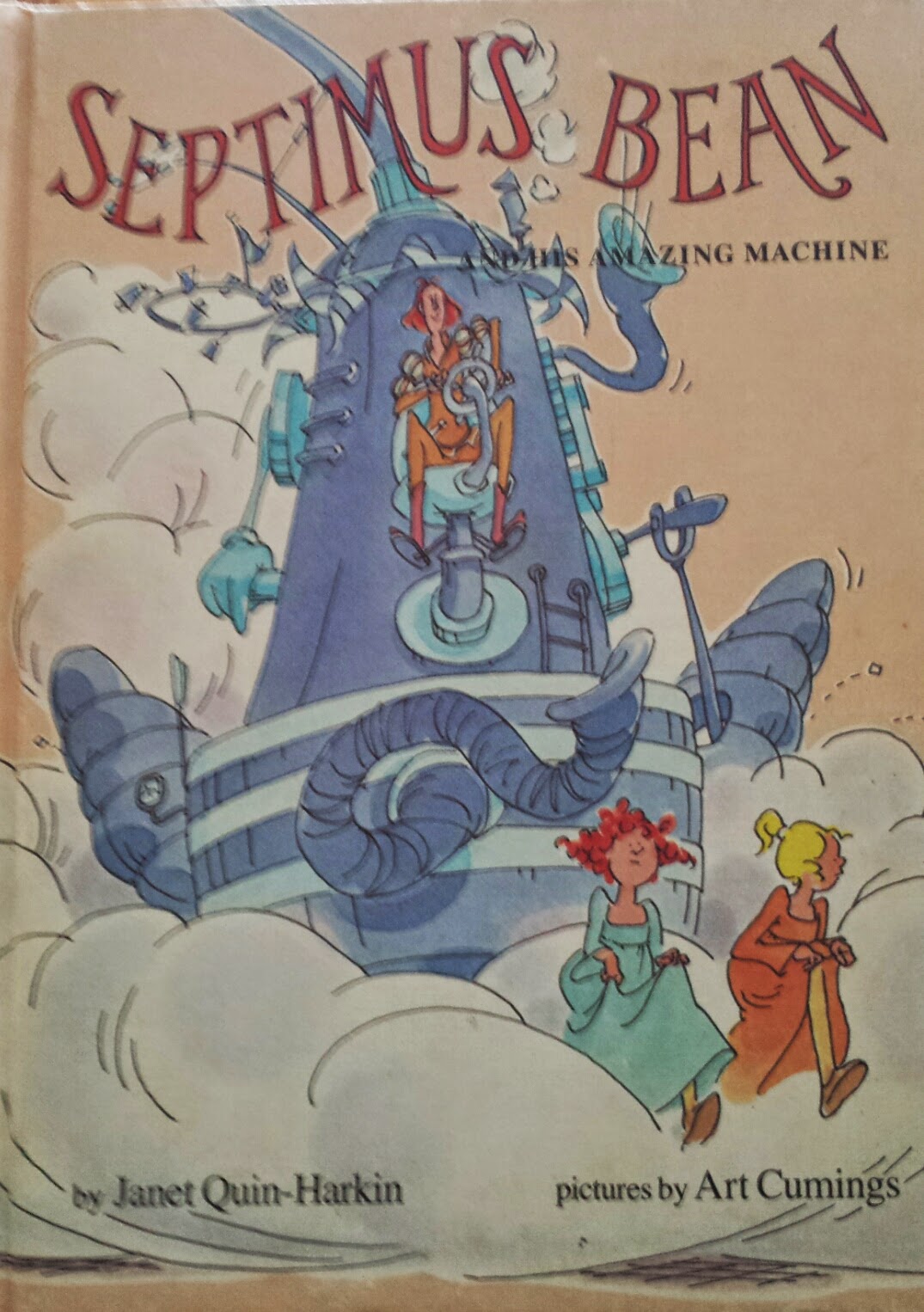 In a world of electronic readers, Kindles, iPads, tablets, etc., it is my biggest hope that young parents still read books to their kids. Real books. Page by page, from cover to cover. Books where children can point to pictures and feel the pages, without parents warning them not to touch the screen. Because when they're older, the youngest years become a blur. Especially as life continues to separate you from the beginnings.

But establishing a night time ritual of giving them a bath, getting in warm pajamas, and climbing into bed to read them their favorite book, is a memory that stays with me like it was last night. And as much as I tried to introduce different books to my two sons, it was the reading of "Septimus Bean And His Amazing Machine" that they waited for each night. It didn't matter whether they were 2 and 3, 4, or 5, 6 and 7 years of age, the adventures of Septimus was what they waited for each night.

Septimus Bean was the creation of author Janet Quin-Harkin, and was a young inventor in the days of King Albert the Third. I'm not sure if it was the lyrical rhymes or the unlimited possibilities of this young mans escapades that captivated my two little blond headed boys each night. But they could barely tolerate my attempts to peak their interest in the Berenstein Bears. It was useless. They would look at each other and roll their eyes (a trait I'm sure they inherited from me) as they waited, anxiously, to hear the adventure of their hero who invented a machine that seemingly had no purpose.

"It was terribly long, and incredibly high,
and seemed (from the ground) to reach up to the sky.
It had wheels. It had bells. It was painted bright blue.
But King Albert asked "Septimus, what does it DO?"

And that was where the fun began. The boys would look at the picture of this crazy, convoluted machine that had a pool in the front, and a catchers mitt for a seat, with gears and bells and wings, and interrupt with ideas of their own. "If you fell off the seat and into the pool, you wouldn't get hurt, right Mom?" They knew full well that Septimus was going to try to impress the king with his amazing machine's ability to fly. And they knew, full well, that after huffing and puffing over the country side, this prize invention would fall from the sky and scatter into pieces that formed the first playground. They knew, every night, what the ending would be, but still waited with such anticipation to get there.

"Then the people were called from each village and town
and the King read a speech that was all written down.
"I name this Bean Park. It's a fine place to play
Where each child in my kingdom may come any day.
And we all owe this playground to Septimus Bean,
who flew through the air in a flying machine."

And then they would clap and yell in celebration of Septimus Bean's victory...each and every night. I loved this. I loved how a simple little book captivated them so. And quite frankly, it was hard for me to accept when they aged out of our bedtime ritual and could read books on their own.

Eventually, other books made their way onto the shelves in their rooms, but "Septimus Bean" came with me. I tucked it away under some sweaters in my drawer until the day I might need it again.

That day is soon. With the imminent birth of my first grandson, I struggled over whether or not I should give it to his father (I still may). The binding is worn but stable enough. The pages hold the fingerprints of all us. But the story provoked such excitement and imagination in my own sons, that I am claiming the first read of this adventure to Lucas. I want him to image all the possibilities that his father and uncle dreamed about. At the end of the book is a sign that is posted in front of the playground. 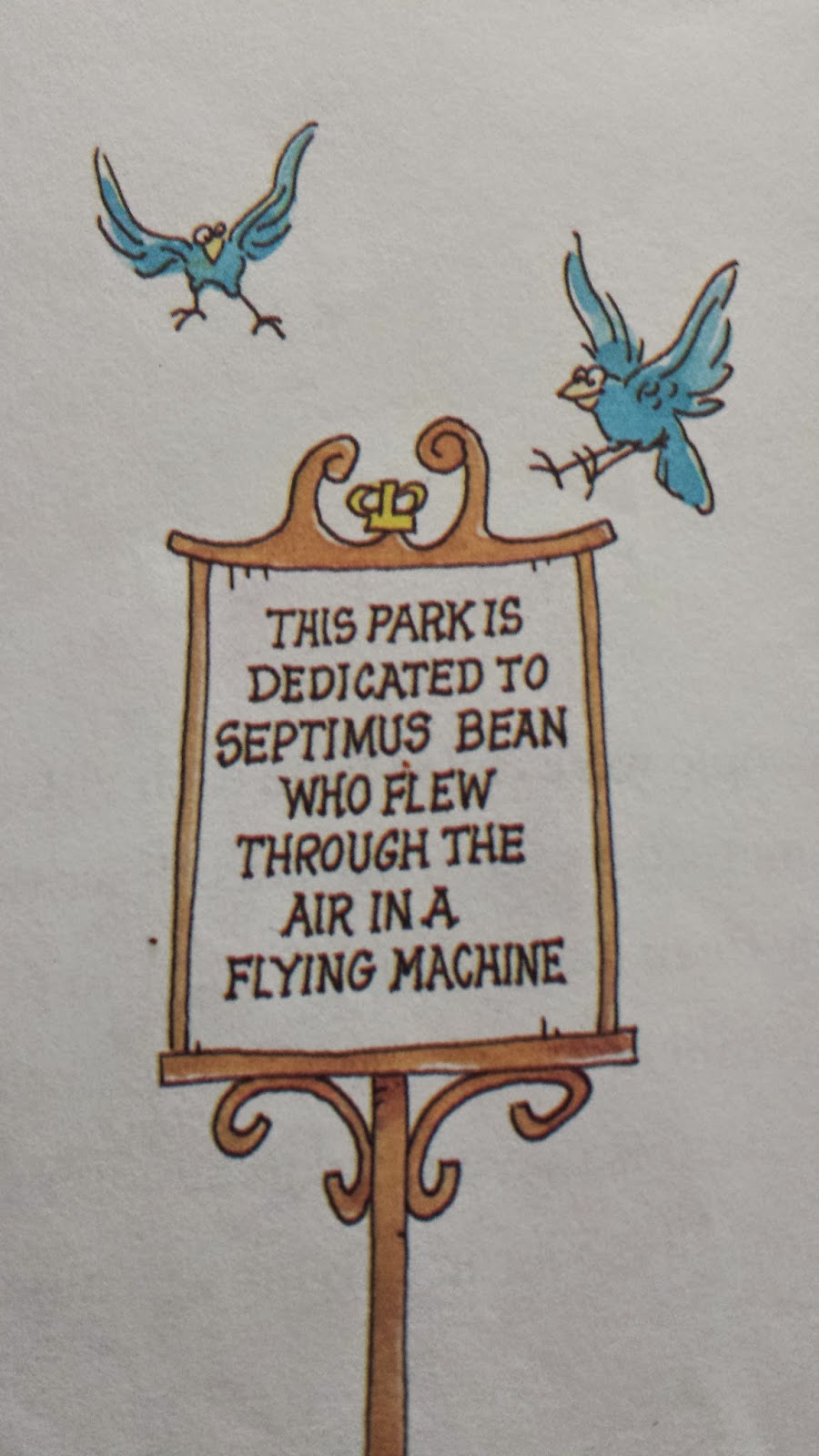 I promise, dear Lucas, that we will go there. Often.