There is a Definite Change in the Air...And I'm ready!! 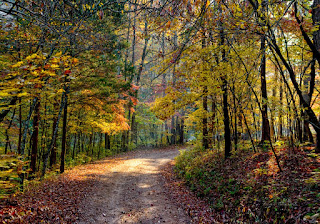 It starts slowly. First, the warm days fall from the mid-80's to the mid-70's. And then the nights cool into the low 60's, sometimes, blessedly, 50's. There is almost no better feeling then an
cool autumn breeze blowing across your sheets. It's late September, the first noticeable sign of fall is not the changing of the leaves. That comes later. And even though you know it's coming, watching the shadows grow longer at four o'clock, and the street lights come on by seven at night, is always a reality check. Now, the days will only get shorter. But I'm okay with that.

The transformation from summer to fall may seen subtle, but its most famous icon, the pumpkin, started making its appearance with the back to school ads in August! I actually tried to avoid looking at farm stands loaded with pumpkins and mums on my way to the shore on Labor Day weekend. It was my only summer vacation and I was intent on riding it to the end!

Pumpkin, or at least its flavor, has become the "now" product. Starbucks, Dunkin Donuts, McDonald's and WaWa all rushed in the end of August with their fall varieties of pumpkin coffees. When I was younger (no remarks required here) there were two versions of anything pumpkin...pie and carving. That was it, a Thanksgiving desert and a Jack-O-Lantern. That has changed.

An office discussion, last week, is was started me thinking about the pumpkin's rise in culinary popularity. Admittedly, this antioxidant rich fruit is loaded with beta carotene which kind of converts to vitamin A in the body. And in the conversion to vitamin A, beta carotene performs many, many important functions to our overall health. Probably none of which are found in the coffee versions.

However, as someone in the office proved with the following recipe, pumpkin is not just best served in a mug or a pie. Without adding sugar and cinnamon, this large and moist fruit still easily adds flavor and definitely holds its own in an entree, such as the stew below: 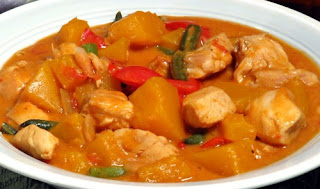 Instructions
Heat the canola oil in a large saucepan. Add the chicken, onion, red pepper and garlic. Saute until the onions are translucent and soft. Set aside.
Combine 1 1/2 cups chicken broth, diced tomatoes, salt and paprika in a stock pot and bring to a boil.
Add the pumpkin and green beans.
Add saute of chicken, onions, red pepper and garlic.
Reduce heat and allow to simmer for 12 to 15 minutes.
While the stew is simmering prepare the thickening agent. Gradually add 2 tablespoons of cornstarch to 1/2 cup chicken broth. Mix in the peanut butter.
After the stew has simmered and the pumpkin is fork-tender, stir in the thickening agent. Cover with a lid and let is idle for a few minutes.
Serve in a hallowed out pumpkin. (Okay, I didn't do this, but it is an option if trying to impress company.)
In the coming months there will be many other recipes that celebrate the harvest, but I really wanted to start out with a rather unique celebration of this autumnal favorite..the pumpkin.
And since, in my research, I found beta carotene offers protection from some degenerative aspects of aging, I may be working it into many recipes!!