In the northeast, it is going to be a chilly Halloween (which I love)! So before young trick or treaters crunch through the leaves on dark streets, it is really a good idea to fill their stomachs with something warm and healthy! In fact, it may even cut down on their desire to munch between houses!

But, spending time in the kitchen is probably not something that all those planned Halloween activities, allows. With that in mind, this scary delicious salsa chili recipe is easy and quick to prepare! It can also be thrown together earlier in the day and put in the crock pot to simmer for hours Or, use a dutch oven type pot to prepare on the stove top. Let the mixture simmer for at least 30 minutes so they flavors can blend together. This is actually now the only chili I prepare because I love the flavor of the salsa in it. And it is so easy to control the "heat" level with the type of salsa you buy!

It's going to be a busy night! Make this early and forget about it! (Which can be hard because it smells amazingly good!) Be sure to pick up a loaf of crusty bread for mopping up the sauce.

That’s it! Saute the garlic in a little oil, add and brown the meat. Then mix in the chili seasoning and reduce to a simmer for about 10 minutes. Drain the meat mixture and put in dutch oven (or any heavy bottomed pot) with all of the other ingredients and let simmer for at least an hour, or, if made earlier, crock pot for at least 4 hours. If you're really feeling the spirit of the holiday, serve in hallowed out pumpkin! Enjoy it, then go hauntingly into the night! 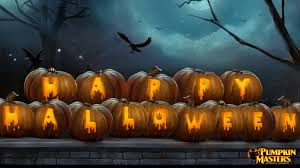 There is a scene in the Steven Segal movie "Under Siege", where the ship has been captured by the bad guys and all of its staff is held hostage...with the exception of the cook (who of course was a former Navy Seal).
He manages to maneuver unseen around the ship taking out the predators one at a time. He finally comes face to face with the very scary and very bad Tommy Lee Jones and says quietly before killing him. "You forgot about the cook."

My two sons loved that movie, and especially that line, even when I started using it every time they thought they were getting away with something. An example? Finding them hiding in my youngest sons closet, playing their DS Nintendo's when they were suppose to be doing outside chores, I opened the door-just a hair-and whispered in, "you forgot about the cook." They scrambled out, "Dag Mom, how did you know we were in there?" Because I was always the cook!

But now, some 20 years later, there has been a mutiny, so to speak. Both my guys take over their kitchens when ever possible and seemingly "one-up" me every chance they get! I know that times have changed and that two-income households have made the kitchen gender neutral. Even my nephew Scott, a single Dad and awesome cook, often swaps recipes with me. So I get it. I just never expected such competition!

For instance, below is a recipe for cheeseburger soup that quickly became a favorite of the family members I invited over Saturday night. Both delicious and easy - my two main requirements:

My son Trevor had a couple of bowls and asked me for the recipe. I obliged. He has become a really good cook and loves to make soup. He made it the very next day and this text and picture (on the left) followed: "Made bread bowls". Seriously?  Where did he come up with that?
And add this to the mix, a week ago, my son Kyle invited me for dinner. He was making slow cooked pulled turkey, a recipe  I invented and perfected years ago. His was better. And he added a side of broccoli-bacon cole slaw that was delicious! It was sweet, salty and savory! Now Kyle is a culinary graduate and should be able to dazzle in the kitchen. But I'm still surprised each time he puts a spin on one of my recipes.
So my boys have become the cooks now. Since I love hosting family dinners, I'd better step up my game. Their culinary conquests have set down a challenge. But no worries, I'll never let them forget about the cook!

Although, I topped my family dinner with a Salted Caramel Buttercream iced chocolate cake! 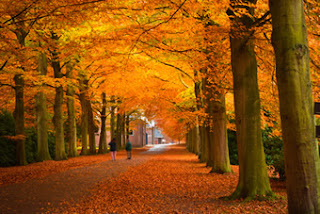 There is a line in Alice Walker's "A Color Purple" that, for some reason, stays with me about the beauty of the world around us. “I think it pisses God off if you walk by the color purple in a field somewhere and don't notice it. People think pleasing God is all God cares about. But any fool living in the world can see it always trying to please us back.”

Well, with all due respect to Ms. Walker, if the world is asking us to take notice, blazing bright against the hues of autumn, it is the color orange that pleases me back, front and upside down. And it reigns in the month of October! 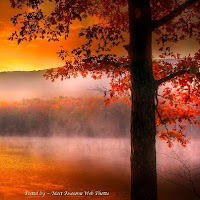 Driving down a tree-lined street, as the amber, gold and red leaves extend on branches and wash over my car in an orange reflection, I always whisper a prayer of gratitude as natures serves as witness to this wondrous creation. I notice. In the early morning, when the damp mist from an earth still warm from summer, rises over a field to meet the crisp autumnal air, it's hard not to notice. When it comes to capturing our attention, I don't think God has a thing to worry about.

The orange of October even has its own scent. Several actually. Burning leaves, pumpkin spices, cinnamon, nutmeg, ginger and anything cooking  in the kitchen on crisp autumn days. As a matter of fact, in keeping with the colors, the scents and taste of October, here is a great recipe I always make around Halloween. Because it has prunes in it, I had to give it a really cool name to get my family to try it initially, but once they did, it was a smash hit! By the way, after adding the hot sauce, it turns orange! 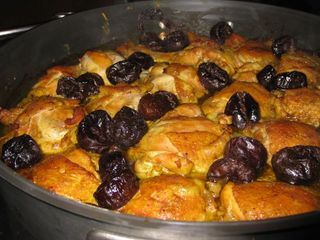 Heat a large skillet with the vegetable oil over medium-high heat. Add the chicken skin side (meaty side) down and sear until golden brown and crisp, about 3 minutes, Flip and continue cooking the other side for 3 more minutes. Remove to a platter and set aside.

Add the white wine to the skillet and scrape the browned bits from the bottom of the pan. Add the chicken stock, orange juice and zest and the hot sauce. Add the red pepper flakes and whisk in the hot sauce and mustard. Bring to a simmer and add the chicken and the juices that are left in the platter. Top with the prunes. Reduce the heat to low and cover tightly with a lid. Let the chicken braise for 40 minutes.

Uncover the chicken and remove to a serving platter. Turn the heat to high and let the sauce reduce for 2 to 3 minutes. Once thickened, taste for seasoning, and pour the sauce and prunes over the chicken. Serve immediately.

One more reason to love October is that it is the start of the gathering season. A time when family and friends come back indoors to huddle around the table. And if that isn't reason enough to love this time of year, I have one more item on my list that excites me more than words can say!