Standing in the sand of Corolla, North Carolina, with my son Kyle and his fiancee, Melissa, I realized that while we may stake our claim to the beach, the ocean rolls in and takes a little of it back with each retrieving wave. It's a battle we'll always fight but never win. That said...some things are worth the battle. The beach is definitely one of them!

Which is why shortly after Thanksgiving the three of us trekked to the Outer Banks to plan the October 2016 wedding of this great couple. We met with the wedding planner, a dynamo Sarah Palin look-alike, a BBQ caterer, that simply knocked our socks off and Jay, a lovely man who is also a non-denominational minister. I profess to being an innocent bystander. They asked me to go so I could provide a third opinion, better described as a tie breaker. However, I must admit that these two had it together when it came to making decisions.

They employ the veto system. Each gets three when it comes to planning for their big day. Veto's are non-negotiable and I think only one was used during our four-day stay. And that was by Kyle. Which I'm not privileged to divulge (which is good because I really can't remember what he used it on...but it must have been important to him.)

The Place:
I had never been to the Outer Banks portion of North Carolina which is a strip of islands separating the ocean from bays and sounds with spectacular sunsets, tall grass-filled marshes and fields of persimmons. The natural setting that Melissa loves and the beach that Kyle can't wait to party on. It is simply beautiful!

The wedding and the reception will be held on the lawns and porches of the Historic Whale Head mansion that can best be described as a beautifully restored 1920's Art Nouveau style residence that is now a museum.  The stately  mansion is part history and part mystery, dating back to the 1920’s, overlooking the Currituck Sound, where whales and dolphins can be spotted spouting while wild horses roam the beach. Local lure tells of pirates, shipwrecks and lost colonies with many quest reporting paranormal activities. In fact, when we took an unguided tour of the inside, we were alone in the basement when Kyle spotted a door knob turning. Needless to say, the tour ended quickly for us. (By the way, we were not informed of the many reported haunts when we took the tour. And, it is not mentioned in the presentation!) 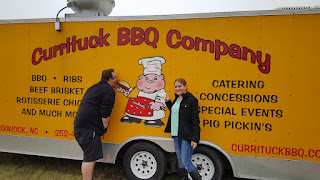 The Menu:
You have to know Kyle and Melissa to understand this menu. They live to enjoy life and their home is often filled with friends and family, food, wine and beer! They wanted something fun and different. So we are having a BBQ! We had researched award winning "pit masters" before we traveled down.

We selected two for the tastings...and then canceled the second one while we were sitting at the table of the first one. Without revealing too much of the menu, I can tell you that this was the most amazing spread of smoke meats and sides that I have ever tasted. The meats are presented without the sauce. That choice is up to individual quest. And what a choice it is! From the vinegar based "North Carolina BBQ sauce" to the heated "Texas Pete", there is a large selection that quest will be encouraged to indulge in. The sauces are "brewed" in large boilers in secret ingredients that are not made available to the general public. And if BBQ sauces are not your thing, I can assure you that the brisket, like a tender roast beef, stands on its own! Southern sides and desserts will fill out this culinary adventure.

The Month:
With off-season rates, daytime temperatures in the 70's and cool nights, the North Carolina shores have become a popular wedding destination in October. All of the shops and restaurants are open till Thanksgiving weekend, with many offering discounts up to 50%. Cooler ocean temps may keep some out of the water, but beach activity if plentiful. Kite flying is a major sport down here, with several kite shops in every town. Wave runner rentals are half the price of the Jersey shore, and of course, horseback riding on the beach is plentiful! Those seeking to have fun, will find it.

Why the Outer Banks?
Until I was there, I will admit to not understanding why these two picked a location so far from home. But after spending time there, and watching the excitement between Kyle and Melissa, I got it! The budget didn't allow for a large, fancy wedding with the traditional trimmings. And (most importantly) they wanted something different in a natural setting with close family and friends around them. It will be a bit of a travel by car for most (from NJ, 6.5-7 hrs. Off season traffic keeps the time down), and by planes for others. They are totally understanding of those that can't make the trip. But for those that do, it will be worth every mile!