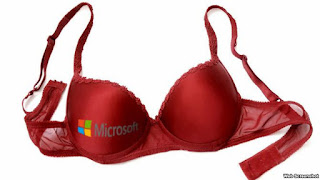 THIS JUST IN..."Researchers at Microsoft have developed a prototype of a "smart bra" embedded with physiological sensors that seek to monitor a woman's heart activity to track her emotional moods and combat overeating. The sensors can signal the wearer's smartphone, which then flash a warning message to help her step away from the fridge and make better diet decisions." CNN NEWS

Sometimes, like most people, I make the wrong decisions. And sometimes, I realize my mistakes at the worst times. Like when I decided that pulling the couch away from the wall and killing the dust bunnies on the wood floors beneath it, could wait until after the busy holidays. And then on Christmas Eve, my seven month old grandson is placed on the floor and the whole family joins him. I'm wondering if a smart mop would have helped me make a better decision in early December.

I thought of that after hearing that Microsoft is putting time and money into a bra that will not just track our heart rates, but also our "emotional moods" and then send warnings to help make better decisions. I'm not talking about a Fitbit type device (which I wear), that tracks footsteps, heart rate, miles walked and calories burned. These are things we can't track on our own and are useful when trying to reach daily goals.

I'm talking about a bra that will gauge your emotional stress, send a message to your smart phone, which will then alert you that reaching for the refrigerator door might not be a wise choice. The fact that anyone even thought this was necessary bothers me on so many levels! First, the refrigerator is where I keep my personal stress reliever...the white wine. Secondly, I don't want my underwear to be smarter than me.

And how will this bra differentiate between a the emotional stress of a bad day, or simply the normal day of the average working mom? The typical woman navigates through a busy work day, then picks the kids up from school, drags them through the supermarket, drops one off at practice, rushes home to start dinner before she has to return to pick that one up and drop an older one off. She finally gets back to her kitchen and her phone rings..."Hello, this is your bra. Please calm down and center your thoughts before proceeding towards the refrigerator." I vision cell phones flying out of kitchen windows at an alarming rate!

I'm trying to think at what point does a smart device cross over from being helpful to interfering with our lives? Okay, here is one situation where I don't always use the best judgement and could use a little help. Picture this; you're walking through the mall and your phone rings..."Hello, we just received a message from your bladder. We know you think you can make it home without leaking, but you can't. Please proceed to the nearest restroom." That could work.

But, it did not escape me that no money or research is being put towards inventing sensors for men's boxers that could send a warning when they are about to make a really bad decision. Even though I'm sure it would be much easier to detect! Or, (better yet) design the sensor in a man's underwear to call his wife when a mistake is about to be made. Hoping, of course, that she is on the phone with her bra.

Look, I am not going to deny that technology has made our lives so much easier. I just don't want sensors anywhere near my business areas, judging my emotions. Besides, I already have a device that tells me when to stay away from the kitchen. It's called a scale. And my underwear gets nowhere near it since it weighs about 2 ounces!