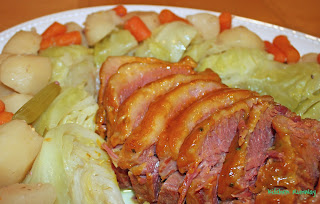 Here, as we all know, St. Patrick's Day is a party to be had! The Kilroy"s, friends of mine, host an annual party that is a two week event! The week before for food preparation and the week following for detox. There will be pans (several) of Sheppard's pie, corned beef and cabbage, Irish soda bread, and whatever else over 100 people will bring. And of course, the whisky, Guinness and Baily's will be flowing. Along about nine o'clock, musicians will stroll in and play the music of Ireland. St. Patrick's Day the way it is meant to be celebrated...in America.

Speaking of corned beef and cabbage, Americans have made this a must have on the day we celebrate the life of an Irish missionary. It's hearty, it's flavorful, and easy. Really easy. Especially when using a crock pot. Just throw everything in and leave for work. Done. Most corned beefs come with a seasoning packet containing peppercorns, allspice, bay leaves, course salt, etc. If not, there are several varieties available. Below is an easy version that is amazing! NOTE: I serve mine with a grainy mustard. But that is totally a personal preference. (But a strong recommendation!)

Place the vegetables on the bottom of the crock pot

Lay the brisket on top

Rub the seasoning's into the meat.

Add about 8 cups of water

Cook on low for 7 hours

It is that easy! A great meal. A great tradition...in America, anyway!