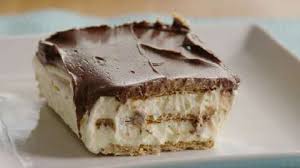 In spite of the blustery, 50 degrees outside, the calendar claims that it is only two weeks till the unofficial start of summer, Memorial Day weekend! And the faithful readers of Kitchen Clatter (and the 1,500 who have downloaded the recipe) know that I always kick off the "hello-summer" season with an Ice Box Cake. A simple no-bake recipe that only requires cooked pudding and Graham crackers. A family favorite! A recipe that I can't wait to introduce to my one-year-old Grandson, Lucas.

But recently, a co-worker, brought in what can only be considered as a

close relative to the beloved traditional summer dessert that I make, and I instantly fell in love with it. And with this one, you don't even have to cook the pudding!!  (A challenge that requires two pots, two wooden spoons, two arms stirring constantly.)

Her recipe, which she calls an "Éclair Cake" is so creamy that after one delicious bite, I stopped eating it because I was afraid it had eggs (hello, my name is Jo Ann and I'm allergic to egg yolks), so imagine my surprise when she said "no eggs, it's instant yellow pudding" No eggs, instant pudding...I'm in! So, I am now including this recipe to my summer array of no bake desserts. Trust me when I tell you it's a must try recipe!

So, if you are into simple desserts that will not heat up the kitchen during those long summer days, this is deliciously perfect! Bring on summer!