It first appeared as just a blip on the radar. "A small area of disturbance, that may or may not form a tropical depression," explained the Weather Channel (which from this point on will be referred to as WC, and further on as FWC, for obvious reasons). A year ago, my son Kyle and his fiance decided to get married in the Outer Banks of North Carolina. Knowing the two of them as I do, this event was a party to be had!

My sister Betty and I rented a house large enough to accommodate our entire family such as our grown children, grandchildren, sister, brothers and spouses. A much anticipated family reunion of sorts. Matthew was not on the guest list.

Now, when my son, his then fiance and myself visited the northern Outer Banks last November, we were reminded that October is still "technically" in the hurricane season but that there hadn't been a late fall storm in the last 30 years, so no worries....really?

As the wedding date of October 14th got closer, I started paying more attention to the weather, mostly because the ceremony was to be on the shores of the Currituck Sound. A beautiful location on the banks of the Whale's Head Club in Corolla, North Carolina. And a week before our scheduled departure, that "area of disturbance", did turn into a tropical depression before turning into a hurricane. The WC's cone of "spaghetti models" had the storm going through Hati and the Caribbean islands. It was sheer devastation for both. After that, they had the storm  heading  far out into the Atlantic Ocean with no real threat to the eastern seaboard of the United States. Whew, that was a relief to hear.

Millions of dollars in satellite driven computer models and not one was right???

Just days before we were to leave, it became apparent that the storm was going to hit Florida hard. As my brother and wife, who live just outside of Miami, were posting Facebook pictures of securing their home with metal shutters, I became obsessed with watching the WC's tracking of the storm where their infamous red "cone", indicated that the hurricane, bearing the name Mathew, would hit the southern east coast of Florida as a Category 4 storm, head on. Then it would go up the east coast, grazing Georgia and South Carolina, before looping east and then south, and possibly hitting Florida again. So the WC said. That never happened.

According to the National Hurricane Center  and the FWC, only the southern tip of North Carolina which is 200 miles south of where we were going in Corolla, would experience storm-like conditions, and minor at that. That's what we were told. Over and over again. Believing what we were seeing and hearing, Saturday, October 8th, my sister Betty and her granddaughter Lauren in one car, Kyle, Melissa and Jen, in another, and Trevor, grandson Lucas and myself in his Jeep, caravaned down to the northern Outer Banks. The red cone still had Mathew veering east, away from the North Carolina coast.

Are you kidding me???

As we neared the end of the seven hour ride, conditions were deteriorating. We didn't know it at the time, but as we made our way over the Wright Memorial Bridge onto the Outer Banks, officials were preparing to close it down, the only link to the northern section.

Later that night, my niece Beth, along with her children, the ring bearer, 7, and the flower girl, 2, drove 12 hours to get to Corolla, only to get stuck on the other side of the bridge...for three days. And because those who knew the situation before we did, evacuated the island and filled the inland hotels, she had to drive almost 2 hours west to find a room. Now the FWC was waking up to the fact that part of North Carolina was going to be effected! This scrolled on the bottom of the station screen when I turned on the TV in my bedroom!

"The current forecast track brings Hurricane Matthew approximately 80 miles south of Ocracoke as a strong tropical storm .  The Entire Outer Banks is currently under a Tropical Storm Warning, Tornado Watch, and Flash Flood Watch.  Conditions are expected to..." WTH? (In the end, the death toll in North Carolina stood at 26. More than any other of the states on the east coast.)

With Beth's worried mother coaching her on the phone, and her GPS failing under the conditions, my son, Trevor, stayed with her on his computer, finding routes and hotels that she felt comfortable staying in with two kids. There were not many options. My sister Bet so wanted to leave the house and go to her daughter to help, but we convinced her that the bridge was probably closed in both directions. Beth left her house in Alabama Saturday afternoon, She did not get onto the island until Tuesday. Throughout the ordeal, she defined the word "trooper"  in every sense.

What I didn't know about hurricanes...

My bedroom was on the end of the house on the third floor, which was the top level. I fell asleep watching the FWC and their red cone of deception telling me I had nothing to worry about. I woke up around 2 a.m. with my bed shaking. I knew there was no power because the ceiling fan had stopped and except for the occasional flash of lightening, it was pitch black. The force of the winds pushing against the house, actually made all of our beds shake. The flat screen TV on the dresser was moving. We all had thought to bring flash lights and candles (just in case) but being ocean-side with three large windows under constant pelting by heavy rain and wind,  I was too afraid to get out of bed.

That was until a gust of wind so strong it blew open a door on the second level, drenching the maid of honor in her bed. The velocity came through the house and collapsed something in the attic over the brides room (which was right next to mine.) She woke up screaming and I ran out into the hall... and smacked right into my sons as they were running up the steps! "Mom it's okay, it's okay" they kept saying as they pulled me in, but my heart was pounding. "Lucas" was all I good say. My sons, who stayed up all night to watch over the house, assured me he was alright. "His crib is in the middle of the house, he is sleeping soundly." His father was watching the monitor on his every move. I spent most of my life protecting them, and now my sons were protecting me. We gathered in the living room where I laid on the couch, as the groom, the bride, the best man and the maid of honor, stood around the kitchen island playing word games and sipping Bourbon (much needed, I am sure). Their presence was a comforting site, but I can't ever remember being so glad to  see the light of day. 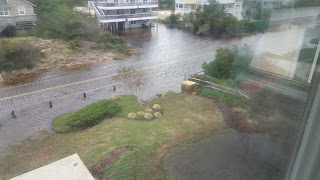 What I didn't know about the Outer Banks...

There is no drainage. There are no sewers. The only way to rid the streets of 13" of rain and any storm surge, is pure evaporation. When we left the island 7 days after the storm, many roads were still under water. The day after the hurricane, Melissa, and her sister Jen, took a walk in the warm sunshine through the flooded streets, only to be warned by a local resident "Girls, be careful, there are snakes in that water." Be still my heart!

Hurricanes, floods and snakes! But it could have been worse!!

As morning approached, and we had all safely made it through the night, our next big worry was how to make coffee with no power. And boy, was it needed! The day before, after we had checked in, and before the weather took a turn for the worse, part of the group piled into a car to get to a local store. Most isles picked over, they still found some food, but no way to cook on an electric stove now. And just as we were searching for a 12V outlet in a car that could power a coffee pot, the lights came on. Divine intervention, I was sure!

The groom and the bride kept spirits high!

In the light of day, it became apparent that travel on the island was limited, at best. Kyle and Melissa, somehow kept positive, for the most part. I was so proud of their spirits. But in reality, I was worried. No bridge, flooded streets and inaccessible rental houses for the wedding party and guest. Even the bride's parents were still off the island. How can we pull this wedding off? Who would be able to come?