Deviled Eggs...Thinking Outside The Shell 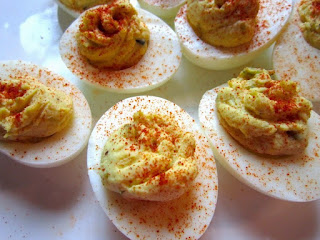 It's Easter and it's time to make the eggs! This is a repost of a heavily downloaded blog. And, I will be making my version of a deviled egg!

This may seem like an odd food subject for someone who is allergic to egg yolks. But, deviled eggs seem to be a staple on the Easter dinner table (at least in my family), and were truly one of my favorite things, And until this morning, I could only eat a deviled egg if I wanted it with a side of anaphylatic shock. But we'll get to that later.

Everyone has their way of making great deviled eggs with most recipes family specific and past down through generations. The classic way of boiling eggs, scooping out the yolks and mashing then with mayo, mustard and sweet relish, is pretty much the standard in most households. But if you really think about it, the classic mixture is a wide open canvas to which so many other wonderful ingredients can be added.

Now, I don't remember my late ex mother in-law as being a great cook, (she was a working woman who was great at ordering out - had that down to a science) but she did devil her own eggs, and always added horseradish to her egg mixture, and her family raved about them. At the time, I was not very adventurous when it came to adding heat to a recipe, so I never tried them. Now, my aging pallet cries out for a little kick to wake it up, and I gladly would sample one...if she were still here, if I were still married and if it didn't kill me.

That being said, I explored several options on the deviled egg front and found some wonderful ideas! But first let me tell you why I can now join the party when it comes to eating an item where the major flavor component is an egg yolk. At first, as much as I tried, I could not think of anything that matched the rich creaminess of that deep yellow yolk.

According to my allergist, 97% of people who have egg allergies are allergic to the whites. That is a tough one. I, being in the other 3%, can a least eat egg white omelets, or even Egg Beaters. Therefore, no complaints here! So there are really not a lot of suggestions out there for someone in my predicament who is just aching for a deviled egg. There was one site that suggested mashing up some hard boiled egg whites with the mayo, mustard and relish, and I did. But to be honest, it lacked the creaminess and taste that yolks provide.

So, as I usually do on a Sunday morning, I started to make a Bloody Mary, which I believe always helps my thought process. And as I was reaching into the refrigerator for a jar of olives...there was my answer!!! Hiding behind the olives was a bar of cream cheese!!!! If I blended cream cheese into the boiled white egg mixture, I would have the rich creamy texture that is mandatory in making great deviled eggs! I just knew a Bloody Mary would help!

It worked perfectly! In a food processor, I blended about 3 ounces of cream cheese, four cooked egg whites, relish, both wet and dry mustard, and the mayonnaise, until it looked about right! Sprinkled in a little sea salt and tasted. It was as close to a regular deviled egg as I've had in 15 years. It was so good, I was actually a little afraid to eat it! After boiling the eggs, I very carefully scooped and discarded the yolk, then washed and lightly dried the remaining egg white. Maybe my excitement made my slightly delusional, but I was pretty sure I liked this version better!

So if you don't care for deviled eggs, but love cream cheese, try making them this way! Okay, now that we've mastered the egg, let's get to some of the variations I discovered in my search. First, is the one I am going to make this Easter!

(I am going to use the term "yolk" since most of you can eat it, but just know that I will be using my new egg white-cream cheese mixture in its place! Blending in a food processor works best for both versions. Also, the ingredient measurements are based on using a full dozen eggs.)


Crab Eggs!
Blend the cooked yolks with 1/4 cup of mayo, 1 tablespoon of chopped parsley, 1 teaspoon of mustard (whole grain if you have it), and the juice of 1/2 a lemon. Add about 8 ounces of lump crabmeat and a couple shakes of hot sauce. Place the mixture in fridge for about 15 minutes to set, then fill the egg whites. Top with a generous sprinkle of Old Bay

Horseradish Eggs! (An ode to my former mother in-law!)
Blend the cooked yolks with 1/2 cup of mayo, 1 tablespoon (or more according to taste) of creamy horseradish. Then add 1 teaspoon of Dijon mustard. Mix in 2 tablespoons of chopped chive. Season to taste then fill the egg whites.

Hummus Eggs! (A friend made this and they went quickly. I obviously couldn't eat them but will definitely try it now!) Blend the cooked yolks with 1/2 cup of hummus, 1/4 cup of plain yogurt and juice of half a lemon. Season to taste and fill into egg whites. ( You can stop here and sprinkle with crushed pita bread, or...) Heat 2 tablespoons of extra virgin olive oil and a 1 tablespoon of chopped of Kalamata olives and a sprinkle of red pepper flakes. Drizzle this mixture of the deviled eggs. I can only imagine how good this will taste with cream cheese!

Wasabi Eggs! (For the adventurous...a.k.a. my sons!)
Blend the cooked egg yolks with 1/2 cup mayo, 4 teaspoons of Wasabi paste. Spoon into egg shells and top with pickled ginger.

Sausage Cheddar Eggs (A great one for kids of all ages!)
Blend the cooked yolks with 1/4 of mayo and a 1/4 cup of shredded cheese. Season with a little salt and hot sauce! Brown, drain and crumble sausage and sprinkle on top! Great version for a slightly different breakfast entree!

As you can see, the basic mixture of 12 egg yolks, 1/2 cup of mayo, 1 tablespoon of sweet relish and 2 teaspoons of Dijon style mustard, is just the beginning. What could be better than adding some cooked chopped bacon or ham? And since we are now mixing in cream cheese, how good would it be to add some smoked chopped salmon?

I love Easter Dinner. There is nothing better than the waft of a roasting ham filling the house. And now, thanks to a desire, curiosity, and the need to add olives to my Sunday morning ritual, I can also enjoy another one of this holiday's favorites! Let me know how adventurous you can get!